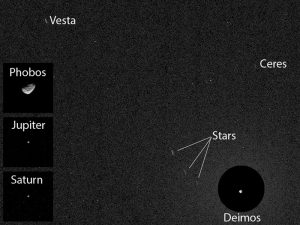 Photo of two asteroids taken by Curiosity from the surface of Mars. Credit: NASA/JPL

NASA’s Curiosity rover managed to capture an image of two of the largest asteroids orbiting between Mars and Jupiter: Ceres and Vesta.

The atmosphere on Mars contains water ice clouds and haze during this part of the Martian year. NASA’s Jet Propulsion Laboratory conducted an instrument test to check the opacity of the atmosphere at night. Several pictures were taken of different astronomical bodies such as, Saturn, Jupiter and Mars’ two moons: Phobos and Deimos. They put off taking the photo of Deimos until the time when it was predicted the two asteroids would be nearby. The wait paid off and both asteroids were captured in one image.

The image above is marked to show the two asteroids and three bright stars. The square insets show images of the other bodies taken earlier in the night. The circular inset covers a much brighter Deimos with an exposure adjusted image of Deimos. The unaltered photo can be viewed on JPL’s website. The asteroids appear as streaks because the exposure time was twelve seconds long. The background noise is from cosmic rays hitting the camera’s light detector.

Ceres is the largest asteroid in the Solar system. Large enough at 950 km in diameter to be considered a dwarf planet. Vesta is the third largest asteroids with average diameter of 525 km. From Earth, a telescope is required to spot these two asteroids. On Mars, a person with normal vision could easily spot both Ceres and Vesta.