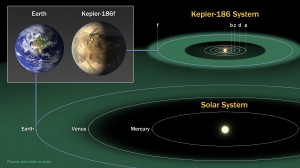 The Kepler Space Telescope has found hundreds of planets orbiting other stars. Of these, many are orbiting within their sun’s habitable zones. Until now, these planets all been at least 40 percent larger than Earth. The Kepler-186 system’s fifth planet, Kepler-186f, is the first to come close to Earth’s size. The mass and composition of Kepler-186f is unknown, so it is not known how Earth-like the planet is. Based on other research, it is likely the planet is rocky.

Kepler-186 is a class M red dwarf star located approximately 500 light-years from Earth in the constellation Cygnus. It is about half the size and mass of our Sun. This means Kepler-186f gets 1/3 less sunlight than Earth. Noon sunlight on Kepler-186f would be like sunlight an hour before sunset on Earth.