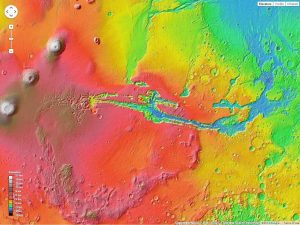 This is a false color map of the Noctis Labrinthus and Valles Marineris canyon network using Google Mars (google.com/mars)

One of the original ‘canals of Mars’ is a huge system of canyons known collectively as Noctis Labyrinthus. This network of canyons empties into the Valles Marineris canyon which is over 4,000 km long, 200 km wide and 7 km deep in parts. These canyons have terrain similar to the Grand Canyon on Earth and popular theory says they were carved out by flowing water that must have been on Mars when they were formed.

Italian volcanologist Giovanni Leone believes water couldn’t have been the only thing that formed these deep canyons. He points to the structures of lava flows here on Earth and believes only lava could have done most of the heavy work. The nearby volcanic region of Tharsis supplied the lava that tunnelled below the surface of Mars forming lava tubes. When the lava pressure subsides from the eruption, sections of the tube ceiling collapse, forming nearly circular pits on the surface. When lava flows through the tubes again and subsides, the ceiling collapses entirely. This forms sharp V-shaped troughs. Over time, soil and rocks fall into the troughs and is carried away by more lava flows. The process is repeated with each subsequent eruption, making the troughs into canyons over time. Several canyons of Noctis Labrinthus and Valles Marineris have the same V-shaped trough of collapsed lava tubes.

Leone’s theory appears in the Journal of Volcanology and Geothermal Research, May 2014. If lava formed these great canyons instead of water, then there would have been much less freestanding water on the surface of Mars than previously thought. This would lessen the chances of finding life on Mars.