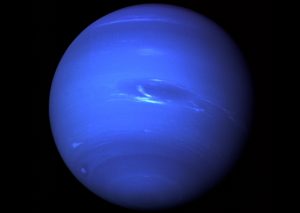 In 1845, astronomers were interested in the orbit of the planet Uranus. It had recently completed a complete revolution around the Sun since it was discovered in 1781. The orbit of Uranus showed signs of some other large mass was affecting Uranus’ orbit. Perhaps a mass large enough to be another planet. Adams set himself to find that planet.

Unfortunately for Adams, French mathematician Urbain Le Verrier also started looking for a solution to the problem of the missing planet. Both men found solutions and presented their results. Adams presented his results to the astronomers at Cambridge Observatory where they were basically ignored. That is, until Le Verrier publicly announced the results calculations in Paris to the Académie des Sciences where it was largely ignored as well.

Upon hearing of Le Verrier’s work, Astronomer Royal George Airy remembered Adams’ calculations and began a frantic search for the new planet. In the meantime, Le Verrier sent his calculations to Berlin where Johann Gottfried Galle quickly found Neptune within 1° of the calculated position. After the discovery was announced, the British astronomers discovered they had spotted the planet earlier on two separate observations, but failed to recognize their achievement.

In general, discovery is credited to both John Couch Adams and Urbain Le Verrier. Adams’ calculations were completed earlier than Le Verrier’s, but Le Verrier’s results were published earlier and the final solution was closer to the actual location of Neptune.