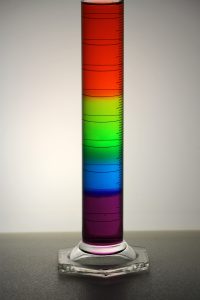 In a liquid, the highest density liquid is at the bottom of the container.

Density is defined as mass per unit volume. The symbol most commonly used for density is ρ (the lower case Greek letter rho). The capital letter D is also used. Density is an intensive property of matter, which means the size of a sample does not affect its value. Density commonly is expressed in units of grams per milliliter and kilograms per liter.

The equation for density is:

The reciprocal of density (V/m) is its specific volume.

Density tends to be higher for solids than for liquids, which are in turn more dense than gases. The density of pure water is defined to be 1 gram per milliliter.

One thought on “Density Definition in Science”