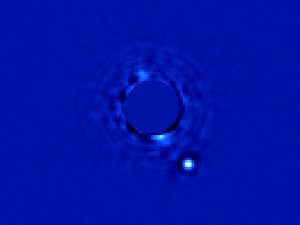 Image taken of the exoplanet Beta Pictoris b. The planet is the white dot and the blue circle is a mask blocking the light of the Beta Pictoris star. Credit: Lawrence Livermore National Laboratories

This image is of an exoplanet orbiting the star Beta Pictoris. While it doesn’t look like much, it is the best direct image ever taken of a planet outside our Solar System. The image was taken using the new Gemini Planet Imager’s adaptive optics system. This equipment was a recent addition to the Gemini South Telescope in Chile and already proving to be one of the most powerful Earthbound telescopes.

Beta Pictoris is a star 63.5 light-years from Earth. Previous images from Hubble showed the star has a ring of debris. This debris has a gap that suggested a large planet was clearing a path with its orbit. This planet’s existence was confirmed in 2009 using the European Southern Observatory’s VLT (Very Large Telescope). Beta Pictoris b is a gas giant planet four times the size of Jupiter and orbits Beta Pictoris once every 20.5 years. Astronomers believe the planet will transit Beta Pictoris in 2015 and allow them to get more precise measurements of its mass and size.