Home » Science Notes Posts » Physics » How Fast Would You Have to Go To Make A Red Light Look Green? Relativistic Doppler Effect

Everyone knows about the doppler effect with sounds. When a train approaches, the pitch of its sound increases. After it passes, the pitch seems to drop off. This is because the sound waves are compressed (wavelength shortened/frequency increased) ahead of a moving sound source. The sound waves expand (wavelength increased/frequency decreased) as the source moves away. The faster the sound source moves, the greater the change in pitch.

The doppler effect happens with all types of waves, not just sound. Light waves can be affected by the speed of the observer in the same matter. If you drive fast enough, you can change a red light to appear green to the driver. How fast would you have to be driving to make a red light look green? 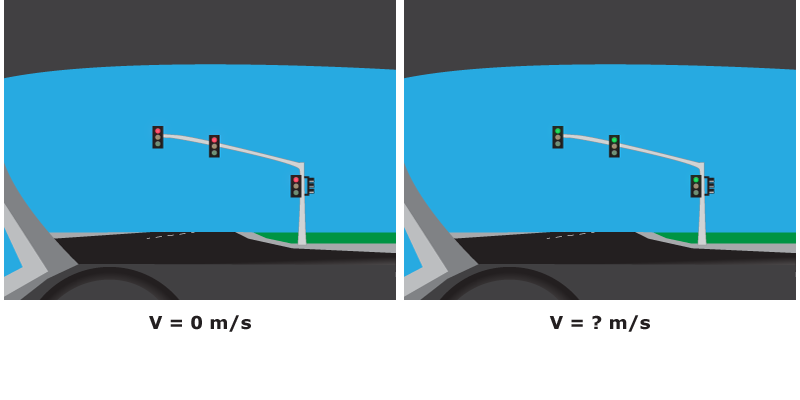 How fast would you have to drive to make a red light appear green?

The speeds necessary to achieve a noticeable change in light are on the order of the speed of light. These velocities need to take account of relativistic transformations of the moving systems. The relativistic doppler effect of wavelength for systems approaching each other can be expressed by the formula

We can solve this for the velocity in a few steps. First, divide both sides by λS

Cross multiply each side

Multiply out both sides

Add  λS2β to both sides

Subtract λR2 from both sides

Factor out β from the left side of the equation

Now we can find the velocity using the relationship: β = v/c.

Now we can plug in some numbers for red lights and green lights. Let’s take the wavelength of a red light to be 650 nm and a green light to be 540 nm. The source light is red and the received light is green. λS = 650 nm and λR is 540 nm. Plug these values into the above equation.

If you do get pulled over, respect the police officer that managed to catch up to you.