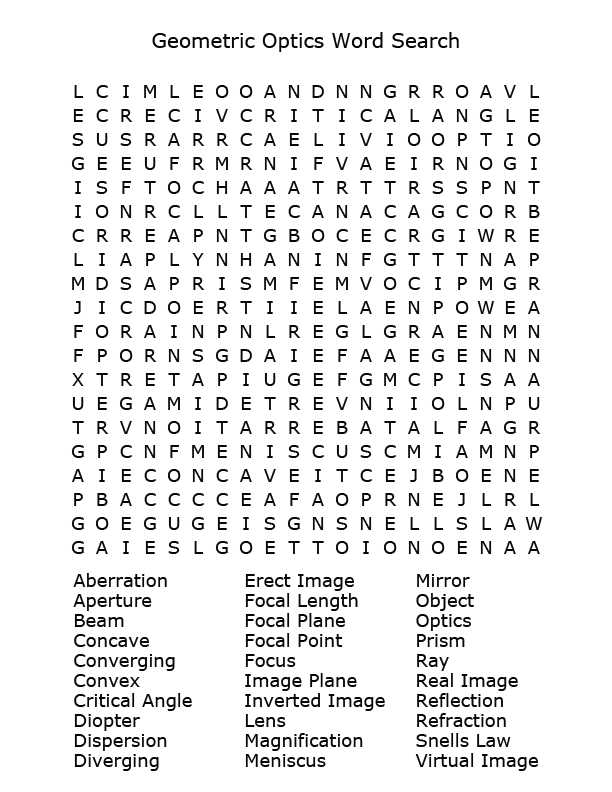 Find the words from the list forward and backward in vertical, horizontal, and diagonal directions.

If you need a little help finding one or all of the glossary terms, a solved version of the puzzle is available.

Here are quick definitions of the terms used in the Geometric Optics word search.

Aberration: Any deviation from the ideal path of a light ray through an optical system causing an unfocused image.

Aperture: An opening that allows a light beam to enter an optical system.

Beam: A collection of light rays into a shaft of light.

Converging: Converging rays refers to the bending of light rays towards each other.

Critical Angle: The angle of incidence in Snell’s Law that produces a 90º angle of refraction in the second medium.

Diopter: a measure of the refractive power of a lens or mirror equal to the reciprocal of the focal length.

Dispersion: The process where a beam of light made up of different wavelengths is split by different amounts in a prism or diffraction grating.

Diverging: Diverging rays refers to the bending of light rays away from each other.

Erect Image: An image from an optical system with the same spatial orientation as the object.

Focal Length: The distance from the center of a lens or mirror to the point of focus.

Focal Plane: A plane perpendicular to the axis of a lens or mirror and passes through the focal point.

Focal Point: The point where incident parallel rays of light converge after passing through a lens or reflected by a mirror.

Focus: Another term for Focal Point.

Image Plane: A plane perpendicular to the axis of a lens or mirror which passes through the image point.

Inverted Image: An image where the image is inverted spatially from the object.

Lens: An optical device that converges or diverges light which passes through it.

Magnification: An increase or decrease in the size of a focused image produced by an optical system.

Meniscus: A lens with one concave side and one convex side.

Mirror: An optical device that converges or diverges light reflected from its surface.

Object: Figure viewed or imaged by an optical system.

Prism: An optical device which refracts light with straight edges not parallel to each other.

Real Image: An image formed where the light rays actually cross. Real images can be projected onto a screen.

Reflection: The change in direction of a light ray by a surface.

Refraction: The change in direction of a light ray by the interface of one medium and another.

Snell’s Law: A law relating the angle of refraction of a light ray as it passes from one medium to another and the medium’s index of refraction. This relationship is given by the formula:

Virtual Image: An image where the light rays appear to cross but cannot be projected on the screen.