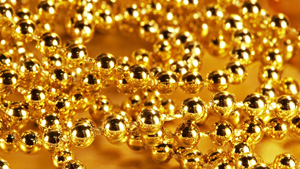 Wait…what? Gold is shiny. How could you add gold to something to make it less reflective? Scientists at University of California Irvine stumbled upon a method to remove glare on optics, solar panels or even your phone’s screen.

While working on a transparent film, the students found their samples appeared to be contaminated with soot. Small black areas would appear on the film — not an optimal condition when trying to make clear films. While they were tracking down the cause, they discovered a means of removing glare.

Their process builds an array of cones on non-stick surfaces at the nanoscale level. The cones are then coated with a thin film of gold. It’s as simple as that. Any light shined onto the surface is essentially eliminated. As an added bonus, the new surface is also hydrophobic. Water and other liquids bounce right off.

Perhaps soon, this will be applied to many objects where glare and weather is a problem. I know my phone could use some water and glare protection.