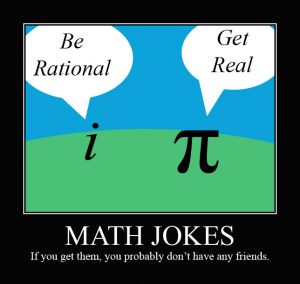 Mathematics is a rigorous discipline with defined terms and rules. Too bad the same is not true of mathematicians. Here are a few of my favorite math jokes and puns. Post your favorite in the comments section.

A math professor is one who talks in someone else’s sleep.

Old mathematicians never die; they just lose some of their functions.

Mathematics is like love: a simple idea, but it can get complicated.

Life is complex: it has both real and imaginary components.

Q: What do you get when you drink root beer in a square glass?
A: Beer!

The highest moments in the life of a mathematician are the first few moments after one has proved the result, but before they find the mistake.

Q: Why didn’t the Romans find algebra very challenging?
A: Because X was always 10.

Q: Why did the obtuse angle go to the beach?
A: Because it was over 90 degrees

Q: Why was the mathematician sad?
A: He had so many problems.

The integral of d(cabin) over cabin is natural log cabin.

Q: What do you call an angle that is adorable?
A: acute angle

Q: What do you call a dead parrot?
A: Polygon

Q: What would you call a destroyed angle?
A: A Rectangle

Q: Why was the math student upset when his teacher called him ‘average’?
A: It was a mean thing to say.

Q: Have you heard the latest statistics joke?
A: Probably.

Q: Why did the chicken cross the Moebius strip?
A: To get to the other … er, um …

Q: What is the simplest way to solve any equation?
A: Multiply both sides by zero.

Q: What is the definition of a polar bear?
A: A rectangular bear after a coordinate transformation.

There are 10 kinds of people in the world, those who understand binary math, and those who don’t.

Three statisticians go out hunting together and spot a deer. The first statistician takes aim and the bullet passes over the animal. The second aims and the shot passes under the deer. The third shouts “We got him!”

Q: What do you get when you cross a mosquito with a rock climber?
A: Nothing, you can’t cross a vector with a scalar.

Q: What does the little mermaid wear?
A: An Algebra

A mathematician, a physicist, and an engineer were traveling through Scotland when they saw a black sheep through the window of the train.
“Aha,” says the engineer, “I see that Scottish sheep are black.”
“Hmm,” says the physicist, “You mean that some Scottish sheep are black.”
“No,” says the mathematician, “All we know is that there is at least one sheep in Scotland, and that at least one side of that one sheep is black!”

One day a farmer called up an engineer, a physicist, and a mathematician and asked them to fence of the largest possible area with the least amount of fence.
The engineer made the fence in a circle and proclaimed that he had the most efficient design.
The physicist made a long, straight line and proclaimed “We can assume the length is infinite…” and pointed out that fencing off half of the Earth was certainly a more efficient way to do it.
The Mathematician just laughed at them. He built a tiny fence around himself and said “I declare myself to be on the outside.”

A newlywed husband is discouraged by his wife’s obsession with mathematics. Afraid of being second fiddle to her profession, he finally confronts her: “Do you love math more than me?”
“Of course not, dear – I love you much more!”
Happy, although sceptical, he challenges her: “Well, then prove it!”
Pondering a bit, she responds: “Ok… Let epsilon be greater than zero…”

Several scientists were all posed the following question: “What is π?”
The engineer said: “It is approximately 3 and 1/7.”
The physicist said: “It is 3.14159.”
The mathematician thought a bit, and replied “It is equal to π”.

In Alaska, where it gets very cold, π is only 3.00. As you know, everything shrinks in the cold. They call it Eskimo π. 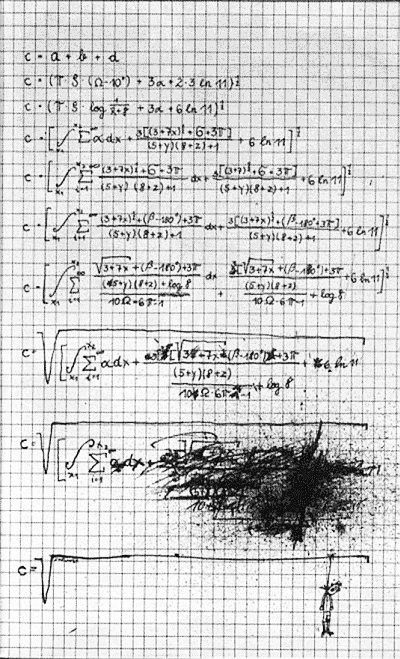 One thought on “Math Jokes”