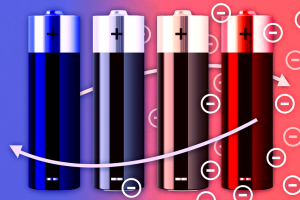 Waste heat is the excess heat energy produced by industrial processes and power generation. This heat is considered waste because it is often just released into the environment as a useless byproduct. Scientists and engineers have tried many different methods to harvest this excess energy and convert it to a useful form.

Many methods center on semiconducting thermoelectric devices that produce electricity from a temperature gradient. One problem with these devices is they often require a large difference in temperatures to work efficiently. Unfortunately, most industrial waste heat temperature gradients are in the relatively small 100 °C range. Researchers at MIT and Stanford are trying a different approach that works with temperature gradients down to the 50 °C range. They are combining the charging cycles of rechargeable batteries and the waste heat.

Batteries are affected by heat. The charging voltage of a hot battery is lower than the charging voltage of a cold battery. The new approach takes advantage of this by placing uncharged batteries in the heat and allowing them to heat up. The hot batteries are charged to capacity and removed to cool. Once cooled, the battery can deliver more electricity than was used to charge it up. The extra electrical energy comes from the waste heat.

The next step will be scaling this up to be practical on an industrial scale. This research was published May 21, 2014 in Nature Communications.