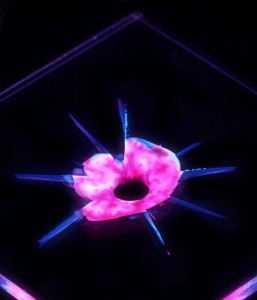 Scientists at the University of Illinois at Urbana-Champaign have developed plastics that repair themselves. Their system that can be used to regenerate the integrity of plastic materials by filling small cracks or even large puncture holes. Two different gel chemicals are pumped into the damaged area where they combine and fill the holes and cracks just like blood clotting in a wound. After the epoxy hardens, the material is nearly as good as new.

In order to do this, the scientists used a two fold system, the epoxy and the delivery system. The plastic is formed using a technique that forms a network of tunnels throughout the material. This system acts as a vascular network to deliver the regenerative chemicals. When damage occurs, the two chemicals will begin to ooze into the damaged area and mix into a gel. The gel allows the chemicals to clump together and stick with the damage rather than leaking out and just making a mess. As the gel cures, crosslinks are formed with the original plastic and the damage is repaired.

The gel formed can be tailored for different types of damage, making it useful for a wide variety of repair situations. The researchers hope their work can be applied to self-healing systems where temporary repairs would be difficult or dangerous for people to perform.

This work was published on May 9, 2014 in Science. They have also posted a YouTube video further explaining the chemicals they used and the delivery system.