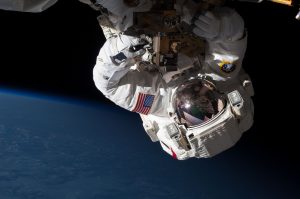 This spacewalk would have been a lot more interesting without the space suit and not necessarily fatal. (NASA)

Space Without a Space Suit

Two of my most favorite science fiction movies of all time involve the main characters exposing themselves to low pressure. Ripley (Sigourney Weaver) spaces the alien in… well… probably every movie with her and the aliens, but Aliens is the best. Quaid (Arnold Schwarzenegger) spends some quality time sans spacesuit on Mars in Total Recall. When I watch those movies, I always wonder if spacing the alien or breathing Martian air would be survivable.

Martian air is pretty corrosive, so I don’t know the answer to that question for sure, but spacing an alien could work, if you could repressurize the spacecraft quickly enough and get medical attention.

Does it surprise you to learn you really can survive in space without a spacesuit, probably for a few minutes? The vacuum won’t be instantaneously lethal unless you try to hold your breath beforehand, which would result in your near-immediate and excruciatingly painful death, as the air in your lungs would expand and burst your alveoli. There’s documentation about the near-vacuum experience. A survivor of a 1965 NASA accident described feeling his saliva boil before he passed out.

In the 15 or so seconds you would have before you lost consciousness, you’d be very cold, but wouldn’t suffer immediate frostbite, because you wouldn’t have air to accelerate the heat transfer. What you would get is an industrial-strength sunburn from the ambient ultraviolet radiation and space-hickeys from the bursting of some capillaries at your skin’s surface.

Covering your skin would help to keep you warmer and protect you from the radiation. Upon getting rescued, you’d need to be treated for the bends (gas bubbles in your bloodstream), much like a deep-sea diver who had surfaced too quickly.

PD: I recommend you to see (If you have not done yet!) a film called “Sunshine”, it has its own “vacuum jupming” scene =)

Yeah,the post is really interesting indeed,never would have thought that Martian air was so dangerous. Imagine sucking Jupiter’s air — full of ammonia and methane, very corrosive!

In 2001 A Space Odyssey, one of the astronauts is locked out by HAL and has to re-enter the spaceship without an airlock (Arthur C Clarke was involved in the filming so the science must be accurate!)

I’ve read previously that the average human could only survive 30 seconds when expossed to vacuum space. However, my knowledge of this is limited to various science-fiction I have read and seen.
I do pose this question: would it not be possible to avoid decompression-sickness if one were to slowly leak pressure, allowing time for the body to adjust? This is the method divers use when surfacing from depths where pressure is greater than at the surface (jumping up to certain depths and remaining there until they become used to the pressure, then jumping again). This method allows them to avoid the “bends” that you mentioned.

2001 was the movie that popped into my head while reading your blog.
It’s interesting to know that a person can survive for several minutes. I’m one of those that thought it was only several seconds, probably due to science fiction like Mauen indicated.

And, if you ever wondered what space would smell like, check out the interesting article from Popular Science (hint – apparently, it smells a lot like a NASCAR race! ) :-

Dave in 2001 survives but you can clearly see him HOLDING his breath right before exiting the capsule. Not accurate!

Just curious – as in if a person can become acclimatised to live at very high altitudes…. it becomes a genetic thing too…

And they were put into a giant decompression chamber….

What would be the “reasonably lowest” air pressure that people couple live at and still be able to function reasonably well?

Ok Lakedah situated in the far north of the India, at over 3500 metres (11,500 feet) in altitude (got lost looking up air pressure tables…)

But in pure oxygen – Astronauts aboard the International Space Station preparing for extra-vehicular activity (EVA) “camp out” at low atmospheric pressure, 10.2 psi (0.70 bar), spending eight sleeping hours in the Quest airlock chamber before their spacewalk. During the EVA they breathe 100% oxygen in their spacesuits, which operate at 4.3 psi (0.30 bar),[68]….

So in plain air if given time to acclimatise, as well as having the gene for low air pressure environments, I am curious as to just how low people can go in air pressure and function reasonably well.

People do ascents of Everest without oxygen (I recall)…. And it would be possible to bring that even lower in air pressure, IF they had time to acclimatise to it..

Thanks for posting this. I have been curious about this for years, and I was unaware of the 1965 accident.  There are so many things that might or might not go wrong in a 120-second exposure to deep space. Unfortunately, the only way to know for sure is experience.

This page was very interesting, I always wanted to know about what would happen to a human body in space, if they wold survive or not etc. as there are alot of myths about this sort of thing. Thanks anne, excellent post.

I find the saliva boiling fascinating. Will your other body liquids boil? The issue with the body fluids is addressed by the saturated steam tables which state that water at 98F (near your internal body temperature) boils with a pressure of 0.89 PSI. Blood contains water. So your blood would attempt to generate 0.89 PSI in your veins. But your ordinary blood pressure is in the range of 2 psi. So, it’s likely that your own blood pressure will prevent blood boiling in your veins. That is until your heart stops “OPEN THE POD BAY DOORS HAL!”. More concerning are your eyeballs and your intestines. Your eyes have a normal intraocular pressure of about 0.3 PSI. The fluid in your eyes will likely boil. Therefore the pressure will increase to 0.89 PSI and you may have considerable pain. Or…Pop Pop, if you get my drift. Remember Arnold’s eyes when he was exposed to the low pressure on Mars. Your intestines are not contained in a very good pressure vessel like your veins or eyes. They would likely begin to expand as the steam volume increases. The moist lining in your lungs…boiling. But you can hold about 2 psi in your lungs if you really try hard so you might be able to prevent boiling there…..until you pass out.