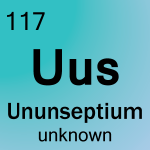 You may recall back in April of 2010 a team of Russian and American scientists discovered the existence of element 117, which has the placeholder name ununseptium. Yet, the element didn’t get a shiny new name and place on the periodic table. This is because the man-made elements require verification before they become official. Today element 117 earned its stripes, when German and American researchers announced synthesis of a few atoms of the element.

Scientists at Oak Ridge National Laboratory (ORNL) in Tennessee created the berkelium used as the starting material for the synthesis. A team of researchers at the GSI Helmholtz Centre for Heavy Ion Research in Darmstadt, Germany, bombarded the berkelium target to obtain superheavy 117 atoms.

So, now that the element is verified, what do you think it should be named?

One thought on “Scientists Make Element 117”