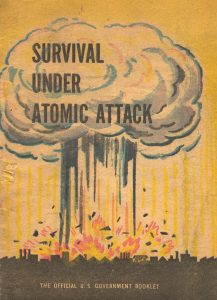 It’s possible to survive a nuclear attack. Know the location of shelters and don’t panic.

The possibility of a nuclear attack is terrifying, but if you’re not at ground zero, it’s possible to survive an atomic bomb, particularly if you take the proper action. Your best strategy depends on several factors, including the time you have to prepare, your proximity to the bomb and the type of bomb. Here are some tips on surviving a nuclear attack or atomic explosion.