January 3 is the anniversary of the first artificial nuclear transmutation of elements. In 1919, Ernest Rutherford placed a radioactive source of alpha particles into a container of nitrogen gas. After a period of time, he discovered some of his nitrogen gas had been converted to oxygen gas.

Nitrogen becomes oxygen by the reaction:

The alpha particles reacted with the nitrogen nucleus and created an isotope of oxygen and an extra proton. Rutherford’s experiment fulfilled the old alchemist’s dream of converting one element into another and was an important early step in nuclear chemistry. 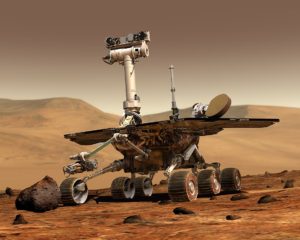 NASA’s Mars Exploration Rover landed on the surface of Mars. It was designed to act as a wandering robotic geologist to sample the soil in the area near its lander. The original plan was for the rover to travel for 40 meters a day with a lifetime range of 1 kilometer, but it continued to function for six years. It got stuck in soft soil five years, 3 months into its life and NASA was unable to find a solution to extract it. It continued to perform its soil sample mission until March of 2010..

1919 – First artificial transmutation of an element.

He was part of the team the created the MKK classification system for stars. This system uses the star temperature and luminosity information from their spectra along with their surface gravity as the basis for the classification.

Morgan also produced the first direct evidence the Milky Way Galaxy was a spiral arm galaxy. He used distance measurements of several larger stars to generate a map. The spiral shape formed when these distances were plotted.