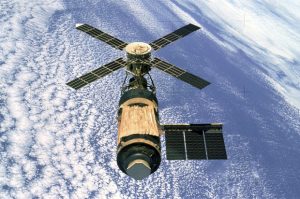 Skylab in 1974. Five years later, Skylab would crash back to Earth. Credit: NASA

June 11 is the anniversary of NASA’s Skylab space station’s return to Earth.

Skylab was abandoned in 1974 when it was parked in low Earth orbit. Skylab’s boosters were out of fuel and one gyroscope had already failed. It was obvious the 77 ton Skylab was going to return to Earth on its own one day. NASA had to come up with a plan to deal with this problem. They decided to use the new space shuttles to push Skylab to a higher orbit, give it an overhaul and begin using it again. By the end of 1978, the shuttles needed for the missions were not going to be ready and something else had to be done. Skylab was going to return in 1979 and could wait no more.

The new plan involved changing Skylab’s orientation so it would re-enter the atmosphere at a time of NASA’s choosing. Skylab would enter the atmosphere and break up over empty ocean. Media attention on Skylab’s return was focused on NASA’s calculations that the odds of any one particular person being hit by a piece of Skylab was 1 in 600 billion, but the odds of any person being hit was 1 in 152. The odds of hitting a city of 100,000 or more was 1 in 7. While you could ignore 1 in 600 billion, it’s a little more difficult to ignore 1 in 7. NASA set up teams to head to any point in the world to deal with possible damage. In the United States, people tended to treat Skylab’s return as an excuse to party. Skylab parties were held all over the United States, t-shirts with big bulls-eyes printed on them and cans of Skylab repellant were sold.

On July 11, 1979, NASA sent the command to Skylab to begin the tumble. They predicted Skylab would re-enter the atmosphere and break up harmlessly over the Indian Ocean 810 miles southeast of Cape town, South Africa. Due to a miscalculation, Skylab reentered the atmosphere one orbit early and broke up over the southern part of Western Australia. Residents of the towns of Esperance and Rawlinna reported sonic booms and fireworks as the pieces fell around them. Fortunately, there were no casualties.

One Esperance resident, 17 year old Stan Thornton, found chunks of Skylab off the roof of his shed. When he took them to his local government, he was told of a contest run by the San Francisco Examiner newspaper. The newspaper was offering $10,000 U.S. for the first person to bring a piece of Skylab to their offices within 72 hours after it crashed. Thornton hopped on a plane with only the clothes on his back and a shaving kit. His ticket was purchased by a Perth radio station and Qantas Airlines got him to the Examiner’s offices by limousine. He arrived with 14 and a half hours to spare. He had the minor problem of arriving without a passport but got a new one even though he had no birth certificate handy either. 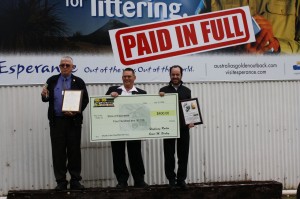 The township of Esperance also decided to fine NASA $400 for littering after the crash. No one really expected the fine to be paid and NASA ignored the issue. Thirty years later, California Highway Radio host Scott Barley arrived in Esperance with a check for $400 to pay off the long standing debt. The radio station had collected the money through a fund raising drive from their listeners.