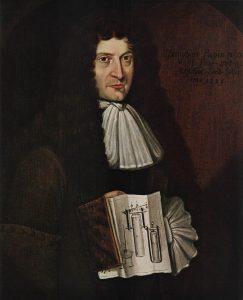 August 22 is Denis Papin’s birthday. Papin was a French physicist and inventor of one of the first steam engines.

Papin was introduced to the air-pump by Christiaan Huygens, another French physicist, astronomer, and inventor. This device allowed them to add or remove air from a vessel to investigate vacuum or high-pressure conditions. After a successful collaboration with Huygens, Papin crossed the Channel to England and worked with Robert Boyle of the Gas Law fame. While here, he improved the mechanism of the air-pump to increase its efficiency and power.

He learned conditions under pressure or vacuum had some interesting effects. One was high-pressure steam could be used to quickly cook food. He designed a device he called the steam digester. This device consisted of a vessel capped by a screw lid. The vessel was could be filled with bones and water. Once the vessel was sealed shut, it was set into a furnace which heated the water. The water in the closed system would soon boil and release steam. Once all the water was converted to steam, the steam would continue to build up pressure. Normally, this process would continue until the vessel explodes. Papin introduced a valve that would release a small amount of steam once the pressure reached a critical level. In a short time, the fat in the bones would be blasted out. This also made the bones soft to make grinding into meal easier. It basically ‘digested’ the bones. This device would be the precursor to the modern pressure cooker.

Papin’s scientific life took him to many places around Europe. The last chapter of his life was to return to London to find employment with the Royal Society as he had in his earlier years. Unfortunately, his old friends were all gone and his applications for grants or funding were all denied. He died in total obscurity and penniless. No one is certain of when he died or where he is buried. An unfitting end to a man who would have a large effect on the upcoming Industrial Revolution.

Other Notable Events for August 22 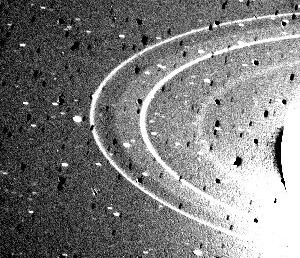 Neptune was found to have a continuous ring system by astronomer Edward Guinan in 1968. When the Voyager 2 spacecraft visited the planet in 1989, it transmitted pictures and verified Guinan’s team’s discovery.

Pincus was an American biologist best known for co-developing the first oral contraceptive. His initial fame was while an instructor at Harvard, he managed to produce in vitro fertilization rabbits. His test-tube rabbits were not well received by the general public and ultimately caused him to lose any chance at tenure. He eventually accepted a post at Clark University where he would continue with the hormone research that would lead to ‘the pill’.