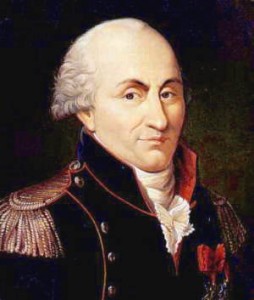 August 23 marks the passing of Charles-Augustin de Coulomb. Coulomb was a French military engineer known for his work with static electricity.

where Q1 and Q2 are the charges and r is the distance between them. If the two charges have the same sign (both positive or negative charge), the force is a repulsive force. If they have different signs (one positive and the other negative) the force is attractive.

Coulomb designed a device called a torsion balance to measure very small forces. The torsion balance consists of a bar suspended by a thin wire ribbon. The ribbon acts as a very weak spring that will twist when forces act on the ends of the bar. The greater the twist, the greater the force. Typically, this device is enclosed in an air tight container so air currents won’t move the bar.

Coulomb’s balance was an insulating rod with a metal coated ball on one end suspended by a silk ribbon. He charged the ball with a known amount of static electricity and brought another similarly charged ball close. He then measured the amount the suspended ball would move. He could then calculate the amount of force from the deflection. After multiple trials, he found the relationship that would become Coulomb’s Law.

His military career involved the design and construction of fortifications in France and the West Indies island of Martinique. After the French Revolution, he was appointed to the commission to develop the Metric System.

Weller was an American microbiologist who shares the 1954 Nobel Prize in Medicine with Frederick Robbins and John Enders for growing the poliomyelitis virus in a test tube from infected tissue. This made the virus easier to research, leading to eventual vaccines. He also cultivated the viruses responsible for herpes and for chicken pox.

Kendrew was a British biochemist who shares the 1962 Nobel Prize in Chemistry with Max Perutz for their investigations into the structures of globular proteins. He determined the three-dimensional structure of myoglobin, the protein that stores oxygen in muscle cells. When a muscle is being used, it requires more oxygen and myoglobin releases any stored oxygen to keep the cell functioning.

Moore was an American biochemist who shares half the 1972 Nobel Prize in Chemistry with William H. Stein for their research into the ribonuclease molecule. They determined the structure of ribonuclease and discovered its catalytic properties during food digestion. Stein and Moore later applied these same techniques to discover the sequence of deoxyribonuclease. 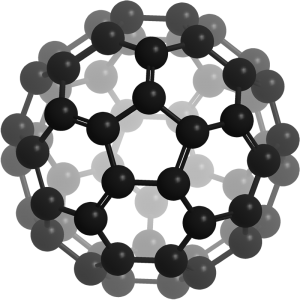 A buckminsterfullerene C60 molecule, also known as a Buckyball.

Curl is an American chemist who shares the 1996 Nobel Prize in Chemistry with Richard E. Smalley and Harold Kroto for the discovery of fullerenes. Fullerenes are a group of carbon allotropes that form spheres, tubes or planes.

The spherical fullerene, C60, is called a Buckyball or Buckminster fullerene. The tubes are called Bucky tubes or carbon nanotubes. The planes are called graphene. 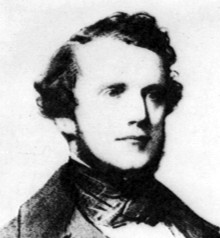 Bravais was a French physicist best known for his mathematical models of crystal structure called Bravais lattices. Bravais lattices are made up of 14 unique arrangements in three dimensions. His work would eventually be verified by x-ray crystallography techniques.

Bravais’ Law deals with the symmetry of faces in crystal structures. It states a crystal faces are planes that intersect lattice points and are more developed when they intersect a larger number of lattice points.