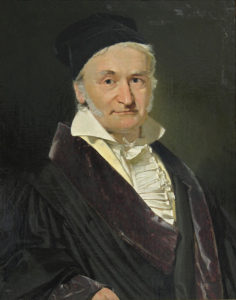 February 23 marks the passing of Carl Friedrich Gauss. Gauss was a German physicist and mathematician who made numerous contributions to a wide variety of topics, including electricity and magnetism, number theory, statistics, and astronomy.

As a young elementary student, one of his teachers asked him to add the first 100 numbers together. The teacher was amazed when Gauss immediately responded with 5050. When asked how he arrived at the answer so quickly, he replied the numbers between 1 and 100 consists of 50 pairs of numbers adding up to 101. 101 50 times is 5050.

Gauss is also known for the binomial theorem which gives the coefficients of the expanded terms of an equation in the form of (a + b)2. He gave us the prime number theorem which proves the subsequent prime numbers are further apart from each other along with how much farther along the next prime will be found.

Another Gauss contribution to mathematics was the quadratic reciprocity law. This theorem outlines conditions to solve quadratic equations in modular arithmetic of primes. Basically, it demonstrates if a modular odd prime quadratic equation has a solution or not. Modular arithmetic is a type of mathematics involving integer numbers that “wrap around” or restart their series at a set sequence. The most common example is a clock. The numbers on a clock range from 1 to 12 and then they restart the sequence to 1. A clock is an example of modulo 12 math. Any repeating behavior can be expressed in terms of modular arithmetic and the quadratic reciprocity helps expand the algebra of this type of math.

Gauss had many interests during his life and made contributions to many scientific disciplines. The one he is best known for is the study of magnetism with Wilhelm Weber. Together, they established a network of magnetic observation stations to determine the location of the Earth’s magnetic South Pole, discovered Kirchhoff’s laws, and built a telegraph machine capable of sending and receiving a signal nearly a mile away. Today, the CGS unit of magnetic flux density is named in his honor.

If you look closely at Maxwell’s Equations for electromagnetic waves, you can spot Gauss’s contribution to electrodynamics. The equation

is known as Gauss’s Law. It says the divergence of the electric field, E is equal to the charge density divided by the electric constant.

Gauss disliked writing papers and would only publish his works once he felt the content was complete and would garner no criticism from his peers. He worked under the motto “Few but ripe”. After his death, there were several notes and unpublished papers which could have advanced mathematics half a century if he had published. 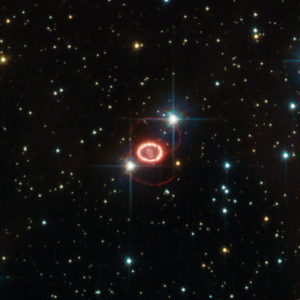 Supernova SN 1987A remnant as seen through the Hubble Space Telescope.

SN 1987A became the first supernova observed since 1604. The supernova was observed from the Tarantula Nebula in the Large Magellanic Cloud galaxy visible from the southern hemisphere. The explosion took place approximately 168,000 years before it was observed on Earth. It was bright enough to see with the naked eye at its peak brightness in May before it began to fade. 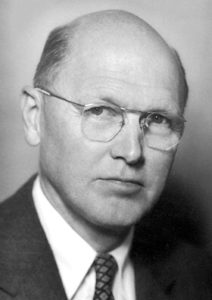 Richards was an American physician who shared the 1956 Nobel Prize in Medicine with André Cournand and Werner Forssmann for their technique and developmental research into catheterization and heart disease. Richards and Cournand pioneered the use of Forssmann’s catheters to study the physiology of shock, heart failure, and other cardiac diseases.

Children from Arsenal Elementary School in Pittsburg, Pennsylvania received the first polio vaccine developed by Dr. Salk. This was the beginning of a test that would involve nearly 2 million children in 44 states. The test would show the vaccine was successful and would greatly reduce the number of polio victims around the world.

Cormack was an American physicist who laid the theoretical groundwork for the technique of x-ray computed tomography or CT scan. Godfrey Hounsfield would take the research and build the first CT scanner and both men would share the 1979 Nobel Prize in Medicine for their efforts. 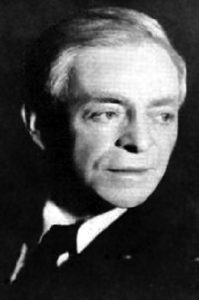 Funk was a Polish biochemist who coined the term ‘vitamine’. He believed there were compounds that were vital to health and were centered around an amine group – vital amines or vitamine. He postulated the existence of vitamins B1, B2, C and D and eventually discovered vitamin B3. Later it was shown that not all vital amines were associated with amines so the final ‘e’ was dropped to just vitamin.

1841 – The first meeting The Chemical Society of London was held. 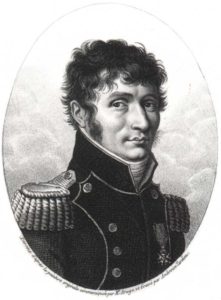 Malus was a French physicist who discovered that when light is reflected, the reflected light becomes partially polarized. He also discovered birefringence of light passing through a prism. Birefringence is where a ray of light enters a medium, it splits into two new rays. The first passes through the medium with no change in direction and the second is refracted.