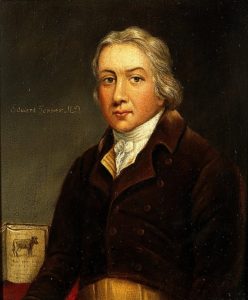 January 26 marks the passing of Edward Jenner. Jenner was the English physician who noticed milkmaids who had been infected with cowpox seemed to never contract the more serious disease, smallpox.

Smallpox is an infectious and contagious disease that causes a fever and a serious rash. It also kills a third of the people who contract it. If they do survive, the rash caused severe scarring and even blinded some victims. On the positive side, if a person survives smallpox, they never catch it again. Doctors used this part of the disease to treat their patients through variolation. Variolation is when healthy people are exposed to a disease in hopes of giving them a milder (survivable) case of the disease. Between 2 and 3% of people exposed to smallpox variolation died.

Dr. Jenner decided to try a different route with his milkmaid observation. He collected the pus from a cowpox sore on an infected milkmaid. He then scratched it into the skin of a young boy named James Phipps. As expected, James developed cowpox but quickly got over it. Two months later Jenner exposed James to smallpox. James never developed smallpox.

Jenner called his treatment a vaccine, from the Latin ‘vaca’, which means ‘cow’. This treatment quickly spread through Europe and caused a dramatic decline in smallpox deaths. The actual technique has changed since Jenner’s day, the practice of vaccination has eliminated the disease. The last natural outbreak of smallpox in the United States was in 1949. The World Health Assembly declared smallpox eradicated in 1980. There have been zero natural cases of smallpox from this date. 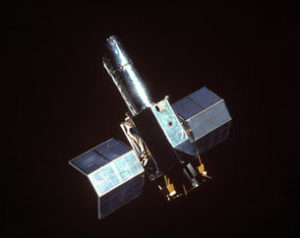 European Space Agency launched the IUE satellite. The International Ultraviolet Explorer satellite measured ultraviolet energy from celestial bodies. Astronomers used IUE for over 104,000 observations of objects from nearby planets to distant quasars. One notable use of the satellite was an extensive study of the solar winds by measuring interstellar dust. It is also credited as the longest-lived satellite where it worked constantly for nearly 19 years. It is also considered the most successful astronomical satellite to date. 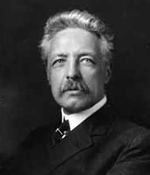 Sauveur was a pioneer of modern metallurgy. He determined the metal structures of materials through microscopic and photomicroscopic techniques. He also investigated the effects of heat-treating materials. During his life, he was considered the foremost expert on iron and steel. 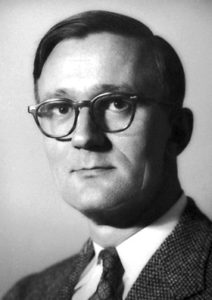 Kusch was a German-American physicist who was awarded half the 1955 Nobel Prize in Physics for his work on the nuclear hyperfine structure. He determined that the accurate value of the magnetic moment of an electron was larger than the theoretical value. The electron magnetic moment is the magnetic moment caused by the electron’s spin and electric charge. This precise measurement was important to the further development of the theory of quantum electrodynamics.