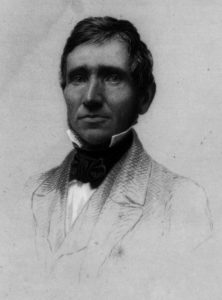 Charles Goodyear was a hardware merchant that turned to inventing when his business failed. He had invented a valve for inflating life vests made of a new substance called india rubber. India rubber was a recently discovered substance extruded from the sap of rubber trees in the Amazon. Investors everywhere were pouring money into rubber companies that were springing up all over the world. Goodyear took his valve to one rubber business in New York and found the business in the process of going under. The reason, natural rubber turns to goo when the temperature gets too hot and turned brick hard and crumbles in the cold. After seeing the tens of thousands of dollars worth of useless returned rubber goods, he was determined to find a way to make rubber useful.

He would spend the next several years trying to add a variety of additives to fix rubber in place over a range of temperatures. He tried taking the stickiness away with powdered additives, but any finished products melted to a sticky paste in the summer heat. He thought he was successful when he tried treating his mixture with nitric acid. The resulting rubber was smooth and dry. Using this process he managed to convince the government to buy mail bags lined with his rubber. This rubber formula was also unsuccessful and he lost another contract.

Eventually, one of the additives he tried was sulfur. One winter day, a sample of the sulfur batch fell onto a hot stove. When he went to remove it, he saw it wasn’t melting away like the other rubbers. This time it was more like leather. Goodyear discovered the process of vulcanizing rubber. He would spend the next two years trying to find the right amount of sulfur and the right amount of heat maximize the quality of the rubber before he applied for a patent.

Goodyear came up with a multitude of ideas for using rubber, but kept failing the business end of his work. His patents were mismanaged or undersold. He ended up spending the majority of the rest of his life defending his patents in court. While he won most of his cases in the United States, the patent piracy continued. He died in 1860 with over $200,000 in debt. Royalties from the rubber patents managed to keep his family comfortable, but never wealthy.

The Goodyear Tire Company, one of the largest rubber tire manufactures today was named in honor of Charles Goodyear. The company was formed 40 years after his death.