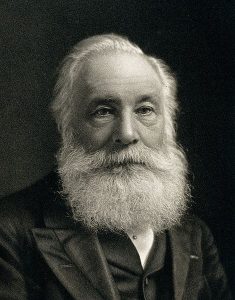 July 14 marks the passing of William Perkin. Perkin was an English chemistry student who made an accidental discovery during his homework that founded a major industry.

When coal is heated enough to form a gas and then condensed, it forms what is known as coal tar. Coal tar holds many organic molecules such as benzene and toluene and naphthalene and anthracene. These molecules form the basis of many other molecules in organic chemistry.

At 18 years old, Perkin was a student in the laboratory of German chemist August Wilhelm von Hofmann. Hofman had assigned Perkin the task of trying to find an artificial method of synthesizing the antimalarial drug, quinine. Perkin worked tirelessly on the project, even to the point of working on it at his home laboratory. During the Easter break in 1859, he was working with the coal tar derivative aniline. He added potassium dichromate to oxidize the aniline and the reaction formed a black solid implying another failed experiment. While washing out the test tube with alcohol, he noticed some of the solid turned a vivid purple color. He felt he found something interesting, but it wasn’t quinine, which his professor wanted. He continued to work on his purple chemical on his own time. He discovered the color worked as a dye after he treated a piece of silk. The silk retained the purple color even after frequent washings and exposure to light.

Perkin knew he had something special. Normally, dyes for fabric come from expensive and difficult to obtain natural products. He found something he could accomplish the same thing with inexpensive coal by-products. Using capital from his father and partnership with his brother, he created the artificial dye industry. It did not take long to make Perkin a wealthy young man.

After a few years, he left the business part of the industry to return to chemical research. He developed other dye colors and found a way to create cinnamic acid, a common carboxylic acid found in many plants. He also synthesized the first artificial perfume which revolutionized that industry as well. He would go on to join the Royal Society and win both the Royal Medal and Davy Medal. The American Society of Chemical Industry created a medal known as the Perkin Medal to go to “innovation in applied chemistry resulting in outstanding commercial development.” The first Perkin Medal went to Perkin himself.