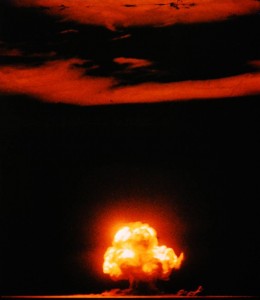 July 16 marks the beginning of the Atomic Age.

In the pre-dawn hours of July 16, 1945 the United States detonated “The Gadget”. The Gadget was the codename for the first atomic bomb.

The test took place in an isolated region of New Mexico known as the Jornada del Muerto Valley. It got the name “journey of death” because of the number of people who died taking the shortcut along the Camino Real road from Mexico City to Santa Fe. The day’s travel had no water, hostile Apache indians and unforgiving desert. In the 1940s, the valley housed the Alamogordo Bombing and Gunnery Range and was a suitable site for the test. It was far from anything and anyone, but not too far from the Manhattan Project’s Los Alamos facility.

The device was constructed onsite and lifted atop a 100 foot surplus firewatch tower. The surrounding area was filled with scientific instruments to record data resulting from the test. A bunker 10,000 yards from Ground Zero served as the control center where the explosive was detonated.

When the device was detonated, the desert lit up enough for the entire state of New Mexico to see. The heat was described as standing in front of a roaring fireplace at the bunker and the mushroom cloud rose to 38,000 feet in a few minutes. A sealed, lead lined tank was sent to Ground Zero just after the explosion to investigate the resulting damage. They found a crater approximately 2400 feet in diameter and 10 feet deep in places. The only thing remaining of the fire tower was the concrete supports and parts of the legs. The surface of the was covered with a thin layer of green glass formed when the heat fused the sand. The estimated yield was 18 kilotons.

Today, the Trinity site is still closed to the public except two days a year. One of these days is the first Saturday in October and the other is the first Saturday in April. It’s still part of the White Sands Testing Range, so it is generally a good idea not to wander around. A marker was added in 1965 and in 1975, the site was recognized as a historic landmark.