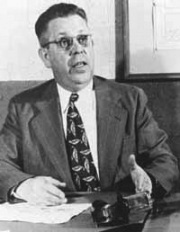 July 19 is Percy Spencer’s birthday. Spencer was the American engineer who invented the microwave oven.

Spencer started out life rather unlucky. By the time he was seven years old, his father died, mother abandoned him to an aunt and uncle and then his uncle died. At age 12, he left school to support his family. At 16 he applied to work as an electrical installer at a local paper mill that wanted to convert their systems to electricity. He got the job in spite of his age and lack of schooling. Spencer discovered working with electricity was more than just work, it was interesting. He left the paper mill to join the Navy at 18 and they sent him to radio school. While there, he did all he could to absorb information relating to wireless technology and radio. He began filling the gaps in his education by reading math and science textbooks while serving his watches. By the time he left the Navy, he was a skilled practical electrician.

He joined a new company run by two men who wanted to bring electricity to appliances used in the home. That company was called American Appliance Company, but would be better known by the name they changed it to in 1925: Raytheon. Spencer had a knack for making things work. He would be responsible for many of the innovations that led to the success of the company. When the company began to make vacuum tubes and radar technology, Spencer was there. His work with the magnetron, a tube that generates microwaves for radar systems led him to design radar systems that were installed in U.S. bomber planes.

Spencer is best known for his accidental discovery that microwaves can be used to cook food. He was standing near a large magnetron and noticed a chocolate bar in his pocket began to melt. He then got some popcorn and set it near the magnetron. It wasn’t long before the popcorn kernels began to pop. Add microwave popcorn to the list of Spencer innovations. The next item he tried was an egg and soon found eggs explode when microwaved. Raytheon patented his idea and Spencer began work building the first microwave oven. 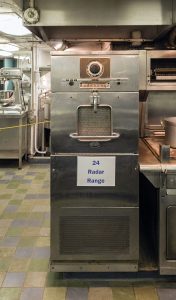 Early Raytheon Radarange microwave oven. This one was installed in 1961 aboard the NS Savannah.

The first microwave oven was a beast. The Radarange oven was almost six feet tall and 750 pounds and cost a cool $5,000 (1945 Dollars – approximately $53,000 today). It was installed in restaurants and other industrial situations. The home version would not come around until 1967. The invention of the microwave was one of nearly 300 patents attributed to Spencer. Raytheon paid him the standard bonus of $2.00 for patents issued to inventors on the payroll.