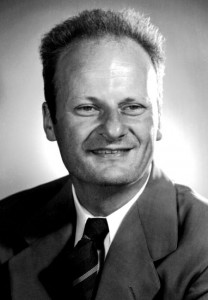 July 2 is Hans Bethe’s birthday. Bethe was a German-American physicist who was one of the driving forces of modern nuclear physics.

He excelled in mathematics from an early age and enjoyed putting math to work for him. He felt mathematics was a tool to make the world a little more obvious. His doctoral dissertation dealt with the diffraction of electrons in crystals. He assumed the electrons could be treated as a wave and the wavefunction should have terms that were the same as the periodicity of the crystal lattice. He found there existed some angles of incidence where the wavefunction would collapse to zero. This meant there were cases where the electron could not exist in the crystal lattice. This work was an important part of the beginning of modern solid state theory.

After graduation, Bethe received a fellowship to travel to other laboratories. He spent time in Cambridge with Ralph Fowler, a British theoretical physicist working in physical chemistry and thermodynamics and in Rome with Enrico Fermi, the man who would build the first nuclear reactor and achieve a nuclear chain reaction of uranium. After his travels, he was a professor at the  University of Tübingen in Germany until 1933.

He lost that position when the Nazi Party came to power because his mother was born Jewish. He moved to England to continue working in physics. While there and trying to obtain a position in Lawrence Bragg’s laboratory, Bragg was visiting Cornell University in New York. The University had a vacant position in theoretical physics and Bragg recommended him to the University. Bethe would spend the rest of his life associated with Cornell University.

Bethe worked on trying to solve how stars create their energy. He outlined a series of nuclear reactions that began with protons from hydrogen and slowly built up the heavier elements. As the fusion reactions took place, energy was released at each step. He also discovered the CNO cycle of nuclear chain reactions where carbon (C) becomes nitrogen (N) and then becomes oxygen (O) and back to the carbon starting point. This work would earn him the 1967 Nobel Prize in Physics.

When World War II broke out, Bethe initially worked on radar systems, but would later move to head up the theoretical division of a top-secret project known as the Manhattan Project. His team would calculate the amount of uranium-235 necessary to achieve a chain reaction and the efficiency of the reaction. Bethe also figured out how to calculate the yield of the explosion He worked on the hydrodynamics of an implosion reaction in the plutonium bomb and how the radiation expands from a nuclear explosion. He also calculated there was not enough energy going to be released to cause a chain reaction of nitrogen in the atmosphere during the detonation of the bomb.

After the war, President Truman announced the hydrogen bomb project. Bethe felt disarmament was a better path, but joined the project anyway. He believed if he was part of the project, he would have been in a better position to argue against their use. Bethe’s personal feelings against atomic and thermonuclear weapons showed when he joined Einstein’s Emergency Committee of Atomic Scientists against nuclear testing and the arms race. He also played a role in the eventual ban on atmospheric testing and the SALT I Anti-Ballistic Missile Treaty.

Bethe was an outstanding theoretical physicist and teacher. He continued to produce new avenues of thought and research until his death at the age of 98.