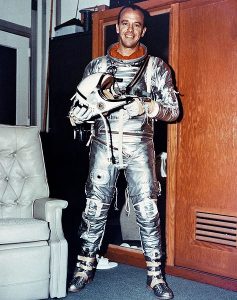 July 21 marks the passing of Alan Bartlett Shepard, Jr. Shephard was the first American to travel into Space.

Shephard was one of the original seven Mercury astronauts and was selected to be America’s first into space. The original launch date was actually earlier than Cosmonaut Yuri Gagarin’s flight, but multiple delays caused the launch to be postponed. Freedom 7 would finally launch from Florida’s coast on May 5, 1961, less than a month after Gagarin. Shepard’s flight only lasted 15 minutes and reached an altitude of 116 miles (187 km). Gagarin’s flight details were a secret, the Freedom 7 flight was done in front of everybody. The takeoff and flight was televised live to millions of viewers, making Alan Shepard a household name.

When NASA began the next phase of their human space travel, the Gemini Project, Shepard was selected to be their first mission’s commander. He lost this position when the flight surgeon grounded him for Ménière’s disease. Ménière’s disease is a condition that affects the inner ear and can disrupt balance and hearing. It can also cause extreme vertigo in some cases and tinnitus. That’s not the best condition to have as a test pilot, let alone an astronaut where disorientation is common to the job. NASA kept him on as the Chief of the Astronaut Office where he coordinated astronaut activities and training programs.

Fortunately for him, a new corrective surgery was developed for the disease. After he recovered, he was returned to flight status. Ten years after his first historic flight, he returned to space as commander of Apollo 14. He became the fifth man to walk on the Moon and the first to hit golf balls on the Moon. His club of choice was a six-iron head attached to a sample scoop handle. After one handedly striking two balls, he claimed the drive went “miles and miles and miles”.