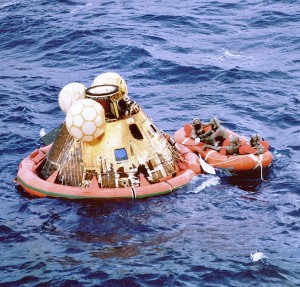 Command module Columbia of Apollo 11 after splashdown in the Pacific Ocean. Credit: NASA

On July 24, 1969 the crew of Apollo 11 returned safely to Earth from their historic trip to the Moon.

The command module of Apollo 11 Columbia re-entered the atmosphere and parachuted into the Pacific Ocean. They landed upside down and had to be righted by the astronauts using flotation pods. They were met by divers from the USS Hornet aircraft carrier. They were handed Biological Isolation Garments (BIGs) to change into to prevent any possible contamination they may have brought back from the Moon. The command module was wiped down to remove all lunar dust and the cleaning materials were sunk into the sea.

The astronauts were flown to the carrier where they entered a quarantine chamber. This Mobile Quarantine Facility (MQF) would be their home for the next 21 days. The President, Richard Nixon stopped by briefly to welcome them back. The USS Hornet ended the day sailing towards Pearl Harbor after collecting the command module aboard.