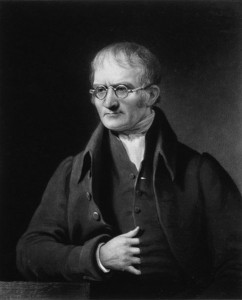 July 27 marks the passing of John Dalton. Dalton was an English scientist who spent most of his early career studying weather and gases. He would expand this work to include a new theory that elements are made up of very small units, or atoms. These atoms were the smallest unit of mass that could not be destroyed by chemical means. All atoms of a particular element were identical to each other. Dalton’s theory also said chemical compounds are formed by combining two or more different kinds of atoms and that a chemical reaction is just the rearrangement of atoms.

His study of weather lasted a lifetime. He kept daily records from 1787 until his death in 1844. He published a book called Meteorological Observations and several papers on the subject. Studying weather involves a close look at gases. He believed air was not a chemical but a mechanical system containing several different gases. He showed the pressure exerted by each gas in the system was independent of the pressures exerted by other gases in the system. He also showed the sum of all these independent pressures was the the total pressure of the system. This is known as Dalton’s Gas Law.

This led him to believe each gas pressure was due to interactions between atoms of the same kind and each atom type was different in weight and what he called “complexity”. He calculated atomic weights of the gases in air using a system where atoms would combine in a logical combination sequence. First, there were the atoms of each element on their own. Then there were binary systems where one atom of element A would combine with element B. Ternary systems were formed from all possible combinations of groups of two elements: one of A, two of B or two of A and one of B. And so on as the groupings became larger. Each group of atoms in air were surrounded by a volume of caloric. Caloric was a liquid that surrounded all bodies, much like aether in the heavens that flowed from hot bodies to cold. In Dalton’s time, caloric explained how hot items would cool and cool items would heat up. Dalton’s volume of caloric around each gas molecule explained why the gases in air would constantly mix and not form homogeneous layers in the atmosphere. He published his theories in the book New System of Chemical Philosophy in 1808.

Dalton’s atomic theory explained many unknown chemical phenomenon of the time and was quickly adopted by chemists. Today, we see flaws with the overall theory. We know today that caloric does not exist. Dalton also had no idea of the existence of parts of atoms and the existence of isotopes. He also didn’t know that atoms could be created or destroyed through nuclear processes. In spite of this, his basic theory lives on in modern chemistry.