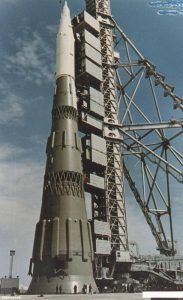 July 3, 1969 was supposed to be the first night launch of the the Soviets new N1 rocket. The N1 design was to be their Moon rocket and heavy payload lifter. It was their largest rocket and the answer to the United States’ Saturn V rocket. It measured just under 350 feet tall when assembled and the first stage had 30 engines which could achieve a thrust of almost 10 million pounds.

This was to be the second launch of the N1 rocket. The previous February’s maiden launch had several small problems that added up to the complete destruction of the rocket. First, the on-board computer system issued a shutdown command to two of the 30 engines just after liftoff. This in itself was not that big of a problem as the design allowed for the loss of four engines. One of the remaining engines began to vibrate and shook apart it’s fuel pipes causing a fire 25 seconds into the launch. The fire reached the computer which shut down the rest of the engines just over 68 seconds after launch. The rocket exploded at an altitude of 40000 feet.

The second launch included a fire extinguisher system. The plan was to launch a payload that would go to the Moon and photograph possible landing spots for future missions. Almost immediately after launch, a “foreign object” fell into one of the fuel pumps. The pump exploded five seconds after launch and severed the electrical lines to the onboard computer. With the loss of the computer the engines immediately shut down 29 of the 30 rockets. The rocket stalled and began to fall back to the launchpad. Twenty three seconds after launch, the 1,780 tons of liquid oxygen and 680 tons of kerosene fuel exploded, destroying the rocket and the launchpad. This spectacular explosion was one of the largest non-nuclear explosions in history.

The “foreign object” that destroyed the pump will never be fully known. Some thought the object was a loose bolt while others believed a defective pump rotor weakened and came apart. The N1 program would try, and fail, two more times before the N1 booster system was scrapped. These failures crippled the Soviet efforts to place a man on the moon and were all kept secret until the 1980s during Glasnost.