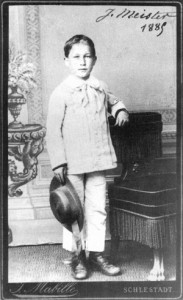 Joseph Meister in 1885. Joseph was badly mauled by a rabid dog and became the first human to receive a new rabies vaccine developed by Louis Pasteur. Credit: Public Domain

July 6 is the anniversary of Louis Pasteur’s human testing of a rabies vaccine.

In 1885, being bit by a rabid animal was a death sentence. Louis Pasteur had been working with the rabies virus to find a treatment for dogs when a nine-year-old boy was brought to him who was mauled by a rabid dog. Even though Pasteur was not a doctor and had never tested his vaccine on people, he treated young Joseph Meister. Fortunately for both of them, young Mr. Meister never developed rabies. Pasteur had successfully tested his vaccine and prevented the disease.

Pasteur developed his vaccine by harvesting the virus from the nerve tissue of infected rabbits. He would then weaken the virus by allowing it to dry for 5-10 days. After the success of his rabies vaccine, Pasteur would go on to use this technique to develop an anthrax vaccine. Pasteur was one of the most famous scientists of the 19th century and recognized today as one of the founders of modern microbiology.

Joseph Meister would grow up appreciating what Pasteur had done for him and the risks he took. Who knows exactly what would have happened if the vaccine was unsuccessful and Meister had died. Since he lived, any legal matters arising from Pasteur practicing medicine without a license were ignored. Meister dedicated his adult life to Pasteur by holding the position of caretaker of the Pasteur Institute in Paris until his death in 1940 at the age of 64.

Today, we vaccinate our pets and treat ourselves using the same basic technique used by Pasteur in 1885. The rabies vaccine is currently listed in the List of Essential Medicines by the World Health Organization. Millions of people owe Pasteur a “thank you” for taking the risk in 1885.