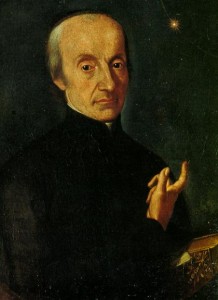 In 1781, Piazzi was appointed the Chair of Mathematics at the new Accademia dei Regi Studi (later to become the University of Palermo) in Sicily. One of the extra tasks he was given was to head up the Astronomy department, even though he knew little about astronomy. He didn’t let a thing like that slow him down. He travelled Europe and met with, and became friends with, many of the prominent astronomers of the time. While in London, he obtained the most advanced and accurate telescope ever built. This telescope became the centerpiece of Palermo’s new observatory. Piazzi used this telescope to compile a catalogue of accurate measurements of the position of stars. His published catalogue became a standard tool for other astronomers. Piazzi was welcomed in the ranks of modern astronomers.

His research rule was to confirm each observation over a course of four different nights. It was during one series of observations on January 1, 1801 he noted a star near the constellation of Taurus. The following night, he found it had moved. Thinking he might have made an error the previous night, he followed up over the next two nights and found it moved even more. He wrote to two other astronomers about this moving object and expressed he may have discovered a comet, but showed no evidence of properties similar to other comets. His letters suggested he believed he may have actually discovered the famous ‘missing planet’.

As early as 1596, astronomers thought there should be a planet orbiting the Sun between Mars and Jupiter. Kepler originally placed a planet in that orbit mainly on the principle of esthetics. He didn’t feel God would leave such a large gap between planets in His solar system. The question of the missing planet was a popular diversion for many astronomers. By Piazzi’s time, there was the Titus-Bode Law that also suggested a planet between Mars and Jupiter. The Titus-Bode Law held there was a mathematical relationship between the orbits of all the known planets. Bode noticed that if you divided the distance between the Sun and Saturn (the furthest planet at the time) into 100 equal parts, Mercury was 4 parts away from the sun. Venus was 4 parts + 3 parts, or 7 parts away from the Sun. Earth was 4 parts + 6 parts or 10 parts away from the Sun. Mars was 4 parts + 12 parts or 16 parts from the Sun. The second part of the equation doubled each time the further you moved away from the sun. The next planet, Jupiter fell in at 4 parts + 48 parts and Saturn came in at 4 parts + 96 parts. If this series held up, where was the 4 parts + 24 parts planet? This law became even more prominent when the planet Uranus was discovered 1781 at 4 parts + 192 parts. Finding the missing planet would be a huge success for any astronomer.

Piazzi continued to watch his moving star and track its movements. By the time his observations were made public, the new star/comet/planet had moved from the night sky. In order to find it again, the orbit needed to be computed from Piazzi’s data. The problem with this, the mathematics weren’t available at the time to compute an orbit from so few observations. Using a circular orbit, other astronomers looked to where Piazzi’s star should be and saw nothing. This caused several outspoken astronomers to criticize Piazzi’s abilities as an astronomer and doubt was cast on the existence of his moving star.

A young mathematician named Carl Gauss took up this problem and computed an elliptical orbit from Piazzi’s observations. Using this formula, Piazzi’s star was quickly located by anyone who looked. Piazzi had found an object orbiting within the orbit of the ‘missing planet’. He named it Ceres Ferdinandea, and later shortened it to simply Ceres. Within a couple months, the discovery of a second object in this region was announced, Pallas. William Herschel would later suggest these two objects were actually a new type of stellar object. These objects are known today as asteroids.

Piazzi’s discovery of the first asteroid firmly planted him as one of the great astronomers, even though he was a mathematics lecturer and really didn’t know a lot about theoretical astronomy.