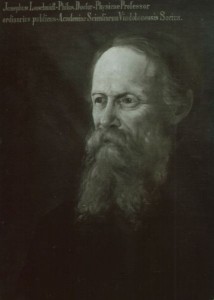 Loschmidt was a Bohemian physical chemist best known for determining the size of air molecules. Some could argue he was the first to suggest molecules could be formed by rings of carbon atoms, like benzene. His work would influence many other scientists who laid the foundations of statistical thermodynamics.

Early in the 19th Century, Gay-Lussac showed when two volumes of gas combine chemically, the resulting volumes of the gases are a integer ratio of the initial volumes. This lead Amedeo Avogadro to postulate the number of molecules was proportional to the volume of the gas at a particular pressure and temperature and was the same for any gas. Finding this proportionality constant became a target for chemists around the world. Determining this constant required making several assumptions, the foremost being the actual size of a gas molecule. Loschmidt tackled the problem of determining the average size of an air molecule. He manipulated the ideal gas laws to include Boltzman’s kinetic theory and Clausius’ work involving the average free path between collisions between molecules. He estimated the if the gas were to condense to a liquid and all the molecules in the gas collected together, the mean free path would be proportional to one eighth the diameter of the molecules. The proportional constant was the ratio between the volume of the gas and the volume of the liquid form of the gas. Loschmidt called this constant the ‘condensation coefficient’. To find the volumes, the density of air was used. The problem at the time, the density of liquid air was unknown. It would be another 12 years before someone would liquify nitrogen. Another unknown was a correct value of mean free path in air. With all these uncertainties, Loschmidt calculated a value for the diameter of air molecules was twice the actual size. His formulas could be rearranged to solve for the number of molecules per unit volume or the number density of an ideal gas. This constant is known today as the Loschmidt constant. When Loschmidt calculated this value, he got a value of 1.81 x 1024 molecules/m3. The accepted value today is 2.687 x 1025 molecules/m3. Pretty close for making assumptions for most of the necessary variables. This number was used to give the first approximation of Avogadro’s number. In fact, in some older German chemistry textbooks, Avogadro’s number is often called Loschmidt’s number and would cause confusion between Loschmidt’s constant and Loschmidt’s number.

Some chemistry scholars point to Loschmidt’s chemistry text Chemische Studien for evidence that Loschmidt theorized the ring structure of benzene and other aromatic organic molecules. He drew structures of nearly 300 different chemicals where molecules were connected by circles representing atoms. In the place of benzene, he had a large circle to represent the benzene center for those molecules. Whether or not he believed the structure was a ring or just ‘unknown’ is a matter of debate. The text was published four years before Kekulé would announce his discovery of the ring structure of benzene. If you’d like to judge for yourself, Google Books has a scanned copy of Loschmidt’s book. The text is obviously in German and unfortunately, the structure section is poorly scanned. The style of the structures can easily be seen.

Josef Loschmidt could have been the household name given to Avogadro considering he gave the first real value to Avogadro’s number.