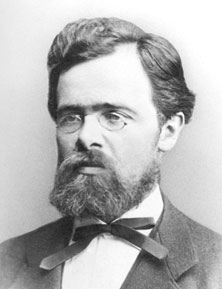 Carl von Linde in 1872 (Age 30). Inventor of mechanical refrigeration and the first to liquefy gases from air.

June 11 is Carl von Linde’s birthday. Linde was the German engineer who developed the first mechanical refrigeration system. He worked from James Watt’s and William Thomson’s (Lord Kelvin) discovery that a gas would change temperature as it is compressed or expanded. He designed a two chamber system that used dimethyl ether as a refrigerant. As the liquid DME would evaporate into its gas phase, the temperature would go down and pull heat energy from that chamber’s surroundings. A compressor would force the gaseous DME back to its liquid state and heat would be released in the other chamber’s surroundings. His first commercial system was installed in Munich’s Spaten Brewery in 1873.

The brewing industry was extremely interested in Linde’s machine. Brewing requires cool temperatures which were only really available in the winter months or in deep cellars with expensive ice blocks. This device would allow them to brew year round at a much lower cost. Orders began to pour in.

Linde left his teaching job to become head of his own company selling his refrigeration systems. He began selling to slaughterhouses, dairies, candy companies and any other industrial facility that benefitted from maintaining a constant temperature inside its factory. While these systems were being built, he opened several ice houses that produced and sold block ice. His company was quickly a success.

Over the next few years, Linde grew tired of being the boss and switched back to engineering to improve his systems. He improved the efficiency of his machine by changing the compression liquid to ammonia. This allowed him to remove more heat per compression cycle. He also began to recycle air through the cooling chamber. This would continue until the temperature was lowered enough to liquefy the air. Prior to this, pure gases were difficult to produce. They were often produced in small batches in laboratory conditions. Linde changed that overnight. He recognised the potential for this discovery enough to sell off his refrigeration patents in exchange for stocks and holdings in liquid gas companies all over Europe. One of his companies, Linde Air Products would go on to combine with four other companies to form Union Carbide, a major chemical manufacturing company. Linde Air Products would later branch off to form the liquid gas company Praxair.