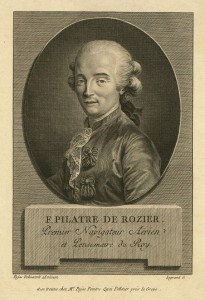 Jean-François Pilâtre de Rozier was a French science teacher. As curator of King Louis XVI’s natural history collections, he was a celebrity in Paris society. He would perform scientific demonstrations with a theatrical flair for the nobility. In one notable demonstration, he filled his lungs with hydrogen and blew his breath into a candle flame. The resulting fireball would be distinctly remembered by all who witnessed it.

On September 19, 1781, the Mongolfier brothers arrived in Paris to demonstrate their new hot air balloon. Pilâtre was in the crowd with the rest of the nobles. Previous balloon flights that carried people were all tethered to the ground. There was some concern that the higher altitudes would have dangerous, if not fatal effects on people. For an untethered flight, King Louis XVI proposed sending up condemned criminals for a test. They decided instead to send up a sheep, cockerel, and a duck instead for experimental purposes. The sheep was supposed to simulate a human for the flight. The cockerel was sent up because it was a bird, but a bird that doesn’t fly very high. The duck was sent up as a sort of control for the experiment since ducks fly high anyway. The flight went smoothly and the animals were all safely returned to earth after reaching a height of 460 meters (1,500 feet). The logical next step would be to send up a person. Pilâtre wanted to be that person. It was suggested that prisoners would be used again or perhaps a skilled worker. Pilâtre argued that someone with a higher social standing should go. On November 21, 1783, Pilâtre, together with the Marquis d’Arlandes, became the first men to fly untethered in a hot air balloon. They rose to a height of about 910 meters (3000 feet) and travelled 9 kilometers (5.5 miles) before being forced to land due to a small fire.

Pilâtre enjoyed the increase in his celebrity status. He was known throughout Europe for this accomplishment until others began accomplishing more spectacular firsts in balloon flight. The biggest loss to his fame came when another Frenchman, Jean-Pierre Blanchard and an Englishman, Dr. John Sheldon flew a hydrogen filled balloon across the English Channel from Britain to France. Pilâtre believed flying the other way would be a greater accomplishment. He went to Calais with an artist named Romains and found the winds against him. They were blowing to the south instead of towards Britain. He felt if he got enough altitude, he could rise above these unfavorable winds and complete his mission. To do this, he built a double balloon system with a hot air balloon beneath a hydrogen filled balloon. 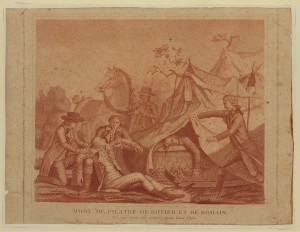 Engraving of Pilâtre de Rozier and Jules Romain’s crash. This was the first fatality in manned flight.

On June 15, 1785 he began his trip. Unfortunately, he did not become famous for crossing the English channel. Instead he became famous for being the first man to die in manned flight. The balloon suddenly deflated and crashed from an estimated 450 meters (1500 feet), killing both passengers.