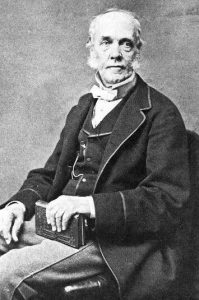 June 18 is William Lassell’s birthday. At the beginning of Queen Victoria’s reign, the port city of Liverpool had just built its first steam railway to the city of Manchester. This would make Liverpool the focus of import/export for much of England’s manufacturing trade. Liverpool would quickly become one of Europe’s fastest growing cities. It was a city full of sailors, immigrants and industrial workers. Lassell made his fortune brewing beer for these thirsty workers.

Lassell used his money to indulge his passion for astronomy. He constructed his own observatory at his house “Starfield”. He ground and polished his own mirror for his 24-inch reflecting telescope. He also constructed a new type of mount for his telescope now known as an equatorial mount. This mount aligns one rotational axis of the telescope parallel to the rotation axis of the Earth. This device allows the astronomer to keep his telescope fixed on a distant object as the Earth spins underneath him. Previous large telescopes had to be adjusted through pulleys and ropes which made long term observations nearly impossible. Lassell’s mount would revolutionize the way observatories would equip their telescopes.

Lassell would use this equipment to discover Neptune’s largest moon, Triton only 17 days after Neptune itself was discovered. Lassell also discovered two moons of Uranus, Ariel and Umbriel. Lassell independently discovered the seventh moon of Saturn known as Hyperion. The American astronomer, William Bond observed Hyperion first, but Lassell beat him to publication. These two men would also compete for the discovery of Saturn’s innermost Crepe ring where Bond would publish first. Some would say this competition would lead Lassell to construct a larger 48-inch telescope on the Mediterranean island of Malta. This allowed him a wider field of view, closer proximity to the Equator and skies clearer than England’s often overcast skies.

Men such as Lassell are a good example of the Gentleman Scholar of the 18th and 19th Century. These men were generally wealthy, decently educated and interested in a scientific field with a lot of leisure time to spend on their interests. By day, they would be industrialists, clergymen, tradesmen, physicians or military officers. During their off time, they were scientists. Astronomy was the largest attractor of this type of scholar, and for the most part, they dominated the field. The Royal Society was full of these “Grand Amateurs” and made the majority of the new discoveries of the time.