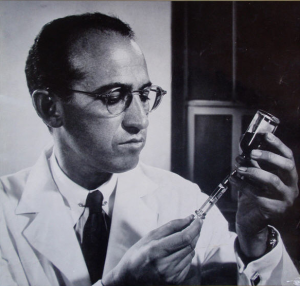 Polio, or Infantile Paralysis, was an epidemic during most of the early 20th Century. One victim brought national attention to the disease by being President of the United States. President Franklin D. Roosevelt suffered from polio and established the National Foundation for Infantile Paralysis to raise funds to fight the disease and care for those who had it. The Foundation began a national radio program effort asking for just a dime from each family. The “March of Dimes” was an annual drive for funds and eventually the Foundation renamed itself. Salk was a researcher who was sponsored by the Foundation. He was working on flu vaccines before turning his attention to a polio vaccine.

Salk’s polio vaccine approach was different from previous vaccines. Most virus vaccines of the time used small amounts of a live weakened virus to encourage the body’s immune system to recognise the virus. The immune system would create antibodies to fight off the virus and be prepared if the patient is ever exposed again to the virus. This technique works well with virus infections like smallpox and rabies. The problem is, if the body can’t deal with the live virus, there is a chance the virus could propagate and infect the patient. Salk believed a body’s immune system could build up the required antibodies from an inactive or ‘killed’ form of the virus without the risk of infection.

Finding a cure for this serious problem made Salk a household name. Salk would go on to form the Salk Institute for Biological Studies dedicated to the study of diseases and their cures. His memory is something that should be remembered on the anniversary of his death.