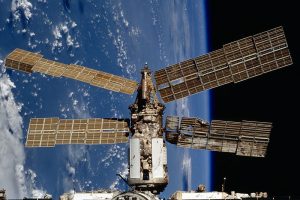 The damaged Spektr science module. This is a crop of a photo taken of Mir from the Shuttle Atlantis. Credit: NASA

June 25 is the anniversary of an “Oops” moment in science history.

On June 25, 1997, the Russians ran a test flight of the Progress resupply spacecraft from the Mir space station. The purpose of the test was to see if the spacecraft could be docked manually by a cosmonaut aboard Mir and possibly eliminate the expensive automatic docking system currently used. This test was also attempted on a previous resupply mission. That test was a failure and the Progress spacecraft narrowly missed striking the station. Ground control felt part of the problem was the radar systems that supplied critical position and speed data were malfunctioning. This time, the radar would be switched off and the only view the Mir pilot would have was from a television camera aboard Progress.

Cosmonaut Vasily Tsibliev was at the controls and had difficulty making out Mir from the background of Earth’s cloud cover. Cosmonaut Aleksandr Lazutkin and Astronaut Michael Foale tried to assist by looking out a port window for the Progress capsule. By the time Tsibliev had figured out the speed of Progress, it was too late. Progress was much too close and moving too fast. He fired the braking rockets but it wasn’t enough to stop the spacecraft. Prospect collided with a solar panel on the Spektr science module. It then collided with Spektr itself. This collision was severe enough to knock Mir into a spin and tore a hole in the side of the Spektr module. Mir began to lose atmosphere. The cosmonauts cut the power leads to Spektr and sealed the hatch. Spektr would never be used again.

Once the air leak problem was fixed, the station’s spin problem had to be addressed. The station’s power was unreliable as the spin faced the remaining solar panels away from the Sun. The computers and gyros needed to fix the spin were not functioning anymore. Foale estimated the spin rate using his thumb against the stars. His estimation was used by Ground Control who fired Mir’s engines remotely to stop the spin. Foale’s guess would prove good enough to restore power and start repairs.

This video contains interviews with the crew of Mir at the time of the collision and video taken during the crash. It is a rather dramatic story worth watching.