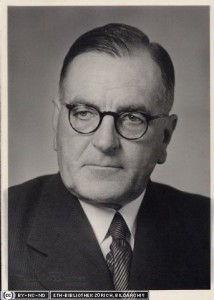 June 26 is Paul Niggli’s birthday. Niggli was a Swiss mineralogist and pioneer of x-ray crystallography.

X-rays were discovered by Wilhelm Roentgen in 1895, but weren’t recognized as electromagnetic radiation until 1912. Based on their energy, if they were light, their wavelength would have to be on the order of one Angstrom (Å) or 10-10 meters. German physicist Max von Laue supposed the atoms in crystals should be approximately 1 Aring; apart, so they should act as a diffraction grating for x-ray light. His theory would pan out when photographs of diffraction patterns were successfully taken from copper sulfate crystals. Crystallographers had a new tool for their studies.

Crystals don’t always grow in neat orderly square patterns and atoms all have different sizes. This means the mathematics necessary to deduce the diffraction patterns produced from crystals is complicated to say the least. This is where Paul Niggli enters the story. He used the mathematics of group theory to outline 230 different space groups known as base crystal lattices. He simplified the notation where the atoms are fractions of the unit cell length and letters represented the shape of the arrangement. By limiting the number of possible groupings, he greatly decreased the number of possible solutions for the diffraction puzzle. His published solutions became a standard handbook for anyone working with x-ray crystallography.

While Paul Niggli isn’t a household name, his work helped others to discover structures of more complicated chemicals, such as proteins and DNA. X-ray crystallography owes him a lot. Happy Birthday Paul Niggli.