June 29 marks the passing of Alexander Parkes. Parkes was an English metallurgist and the man who introduced us to plastic. 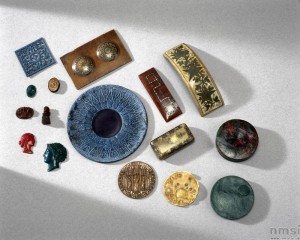 Parkes created his plastic by dissolving cellulose in nitric acid and adding wood naphtha as a solvent. When the solvent evaporated, a flexible material was left. Parkes was quick to recognize he had discovered something special. He patented his discovery and named it Parkesine. He debuted his new product at the 1862 London International Exhibit. He constructed several colorful items such as combs, card cases and pens. He announced his material could be worked in many of the same ways as India Rubber. The colors could easily be added to the product and were not simply painted on or veneered to the surface. Parkes took home the prize medal for “excellence of product”.

Parkes was a better inventor than businessman. He created the Parkesine Company to mass produce Parkesine for manufacturers. He had the idea to keep his material inexpensive, but had many difficulties achieving this goal. His cost cutting attempts ultimately produced a plastic much more brittle than the 1862 products. Parkesine also has the distinction of being extremely flammable. After two years, the business was bankrupt and had to close.

Parkesine wasn’t his only invention. He held over 60 patents during his lifetime. One of the more important ones was the cold cure process to vulcanize rubber. He also discovered an inexpensive method to remove silver from lead. During his early days as a metallurgist, he developed methods to electroplate delicate objects and art. He once electroplated silver onto a spider web which he presented to Prince Albert during a visit to his place of business.

Parkes was a remarkable man and the world would soon be changed when other plastics were discovered.