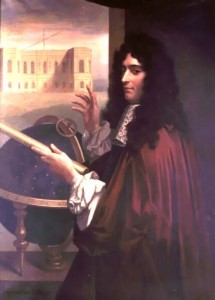 June 8 is the birthday of Giovanni Domenico Cassini. Cassini was the Italian astronomer that helped set up the Paris Observatory for King Louis XIV. He served as the first director of the Observatory until his death in 1712.

During this time, he was responsible for many discoveries. He was the first to observe four of Saturn’s moons: Iapetus, Rhea, Tethys, and Dione. The large gap in Saturn’s rings was discovered by Cassini and now known as the Cassini Division. He determined the rotation periods of Mars and Jupiter and was the first to note the different rotational speeds in Jupiter’s atmosphere. He shares the credit for the discovery of Jupiter’s Great Red Spot with England’s Robert Hooke.

Using longitude and latitude measurements, he calculated the size of France and discovered the country was much smaller than previously believed. King Louis took this with good humor and remarked that Cassini had taken more of his kingdom than he had gained in all the wars he won. King Louis must have been pleased enough with Cassini’s measurements and work since he enjoyed enough royal favor to produce a four-generation dynasty of Cassinis to head the Paris Observatory. 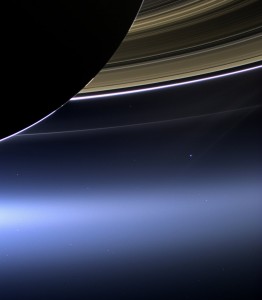 One of the famous images from the Cassini spacecraft. This view of Earth through Saturn’s rings. Earth is the bright blue dot in the wide gap between the outer two rings. Credit: NASA/ESA/ASI

The Cassini spacecraft was named in his honor. In 1997, NASA, ESA, and ASI launched the Cassini-Huygens spacecraft to orbit Saturn. Seven years later, it arrived at Saturn to deploy the Huygens probe on Titan and begin observations of Saturn. It has proven one of the most successful missions to other planets to date. It has sent back a treasure trove of new information and images until 2017, when Cassini entered Saturn’s atmosphere. An excellent tribute to the man that greatly increased our knowledge of Saturn.