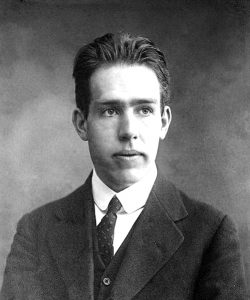 Niels Bohr (1885-1962) Danish physicist and one of the principal founders of quantum mechanics.

November 18 marks the passing of Niels Bohr. Bohr was a Danish physicist best known for his research into atomic structure and quantum theory.

Bohr developed a model of the atom where the positively charged nucleus was surrounded by electrons orbiting in discrete energy levels. The chemistry of the atom would then be determined by the number of electrons contained in the outermost energy levels. This theory also explained the visible spectra given off by elements. Bohr’s model showed the transition of an electron from a higher energy level to a lower energy level would release a photon of light equal to the difference in energy between the two levels. When applied to the hydrogen atom, the predicted energy levels corresponded to the spectral lines observed from hydrogen. This verification of his model would earn him the 1922 Nobel Prize in Physics.

Bohr also attempted to explain the structure of the atom’s nucleus. His theory was known as the “liquid drop model”. This model had the nucleons of the atom’s nucleus behaving like the molecules in a drop of liquid. If enough energy is pumped into the nucleus, the liquid nucleus will deform and split into smaller fragments and release energy in the process. This theory contributed to the understanding of what was happening when uranium atoms were observed to split into smaller pieces when neutrons were introduced.

Bohr spent much of World War II in Denmark continuing his research. He also helped German refugees escape from the Nazi Party. Shortly after being notified of his own arrest by the occupying German forces, Bohr left Denmark to Sweden and then to England. While there, he was recruited into the Tube Alloys program, Britain’s version of the Manhattan Project. His involvement with this project did not hinder his desire for the peaceful applications of atomic energy. He was part of the group that developed CERN and their laboratories.

Bohr’s laboratory was responsible for many of the early contributions to quantum mechanics. The Institute for Theoretical Physics in Copenhagen where he did much of his work was renamed the Niels Bohr Institute in his honor. Element 107, Bohrium was named in his honor. 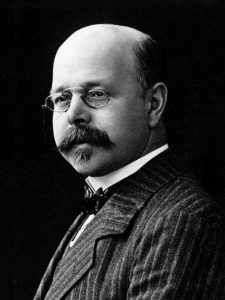 Nernst was a Prussian chemist and one of the pioneers of modern physical chemistry. He was awarded the 1920 Nobel Prize in Chemistry for his contributions to thermochemistry. He introduced the third law of thermodynamics concerning the impossibility to achieve a temperature of absolute zero. As the temperature approaches absolute zero, the entropy of the system reaches a minimum.

He is also known for the Nernst equation describing the equilibrium potential of a half-cell electrochemical battery. 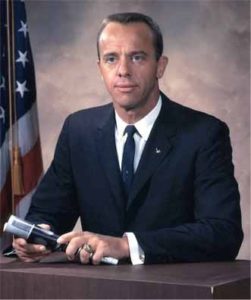 Shepard was an American astronaut and one of the original seven Mercury astronauts. He was the first American in space during the Freedom 7 mission on May 5, 1961, just three weeks after Soviet cosmonaut, Yuri Gagarin made his historic flight. Shepard was also commander of the Apollo 14 mission to the Moon. While on the moon, he indulged in another of his interests, golf. He hit two golf balls with a six-iron attached to a lunar sample scoop.

Blackett was a British physicist who was awarded the 1948 Nobel Prize for the development of the Wilson cloud chamber radiation detector and his studies on cosmic radiation. A cloud chamber is a sealed chamber containing a supersaturated, supercooled vapor of water or alcohol. When ionizing radiation passes through the chamber, it ionizes the vapor and a condensation trail forms where the ions are formed.