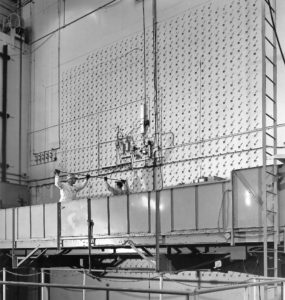 Workers pushing rods of uranium slugs into the X-10 reactor.

November 4 marks the anniversary of the day the X-10 graphite nuclear reactor went critical for the first time.

The Manhattan Project atomic bomb program needed a source of plutonium-239 for its weapon design. The best place to get plutonium is from uranium. Natural uranium is mostly uranium-238 with a very small amount of uranium-235. When uranium-235 decays, it kicks out a neutron. Some of these neutrons collide with the nuclei of uranium-238 atoms which converts them into plutonium-239.

The Clinton Pile (X-10 was its codename) was designed to create plutonium-239 on a large scale. The reactor was a large cube of graphite 24 feet (7.3 m) on each side surrounded by a 20 foot (6.1 m) thick layer of concrete. The front and back of this cube had 1,248 diamond shaped holes drilled through to allow workers to push rods containing slugs of uranium into the graphite. The density of neutrons emitted would reach the critical level where the reaction is self-sustaining. The uranium-238 would begin to turn into plutonium-239 automatically.

Once a rod had enough time to convert its contents, workers would push the rod out the back of the pile where it would fall into a collection pool of water. After a couple weeks, the radiation levels would be low enough to be delivered to the separation facility.

X-10 provided a lot of practical engineering data that found its way into future nuclear reactors, bomb design and reaction safety mechanics. It operated continuously from 1943 to January 1945 to make plutonium. The reactor continued operation as a research reactor until a cooling pipe burst in 1963. Rather than fix the problem, the reactor was shut down permanently.

The original X-10 reactor is now a National Historical Park. If you’d like to visit, the American Museum of Science and Energy in Oak Ridge, Tennessee has a bus tour of the Oak Ridge facilities. You can visit the Y-12 History Center, the X-10 reactor facility and drive by the K-25 plant (K-25 is still off-limits to the public). All you need is to be a US citizen with photo ID, over the age of 10, and have $5.

Fun fact: The X-10 reactor was the first breeder reactor. It’s called a breeder because it produces daughter isotopes. Physicists like that sort of joke.

Kao is a Chinese electrical engineer who was awarded half the 2009 Nobel Prize in Physics for his contributions using fiber optic cable for telecommunications applications. He showed early fiber optic cable had a high signal loss over distance because of impurities in the glass. He later determined highly pure silica glass could greatly improve signal loss and opened a new chapter in data and signal transmission. 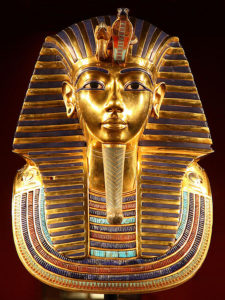 A laborer working for British archeologist Howard Carter stumbled on a sunken step that would lead down to King Tutankhamen’s tomb. Carter soon opened the tomb to find a virtually intact burial chamber of a little known young pharaoh. The discoveries shed a new light on life and death in ancient Egypt.