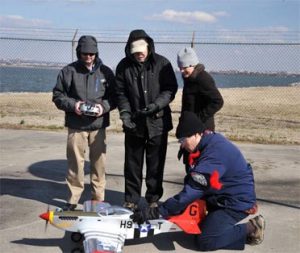 Scientists from the U.S. Naval Research Laboratory (NRL) demonstrated a fuel they created from seawater could power an off-the-shelf internal combustion engine. A radio controlled P-51 Mustang modelled after the famous Red Tailed Tuskegee Squadron was flown using the lab created fuel without any modifications to the plane’s engine.

The fuel is the combination of two NRL projects. The first is uses an electrolytic cation exchange module that removes CO2 from seawater. Seawater contains a lot more carbon than air — nearly 140 times as much. Most of this carbon is in the form of bicarbonate with smaller amounts carbonate and carbonic acid. The NRL process converts the carbonate and bicarbonate into carbon dioxide and hydrogen gas.

The second project uses CO2 and hydrogen gases to synthesize hydrocarbon liquids. This project is a two step process. The first step creates unsaturated hydrocarbon olefins from the gases using an iron catalyst. The second step polymerizes the olefins into into the hydrocarbons in the C9 to C16 range. These hydrocarbons are used as building blocks for petroleum based aviation fuels, industrial chemicals and designer fuels.

With the successful flight of the RC plane, the Navy has demonstrated proof of concept. The next step is to move from the laboratory scale to the industrial scale. They believe this process could be economically competitive within a decade. Perhaps you will board a jet using fuel from seawater sooner than you think.