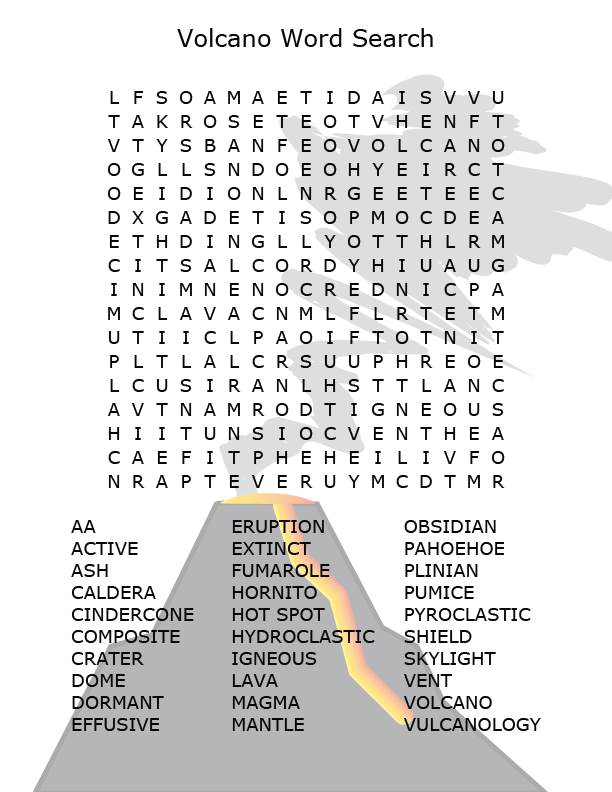 Find volcano-themed words from the list forward or backward in vertical, horizontal, and diagonal directions.

If you need a little help finding one or all of the astronomy terms, a solved version of the puzzle is available.

A’a: Hawaiian term for lava with sharp, spiny, and jagged edges. Said to be the sound people make when walking across it: Ah Ah!

Active: Description of a volcano which is currently erupting, erupted once in recorded history, or erupted once before and expected to erupt in the future.

Caldera: A large crater formed at the summit of a volcano when the surface collapses after magma recedes or explodes from an eruption. Calderas differ from craters by their size. Calderas are large craters.

Cindercone: A type of small volcano with conical sides formed by the accumulation of ejected cinder and debris from the erupting vent.

Composite: A type of volcano composed of a composite of cinders, ash, and cooled lava. Composite volcanos often have a low gently rising slope which increases quickly the closer to the vent.

Crater: A depression formed at the top or flank of a volcano when magma recedes and the remaining bubble collapses or the depression left after an eruption.

Dome: A volcanic feature formed from a bubble of lava typically found directly above a volcanic vent.

Dormant: A type of volcano not currently erupting, but expected to erupt in the future.

Effusive: The flow of lava from a volcano other than from an explosive eruption.

Extinct: A type of volcano not currently erupting and not expected to erupt in the future.

Fumarole: A vent in the Earth’s surface where volcanic gasses are expelled.

Hornito: A small cone formed when lava erupts from a cooling lava flow.

Hot spot: Areas under the Earth’s surface believed to be heated from the mantle away from tectonic plate boundaries.

Igneous: Type of rock formed from the cooling of magma or lava. Also refers to any process involving magma.

Lava: The name for molten rock which reaches the Earth’s surface through a volcanic eruption.

Magma: The name of molten rock beneath the Earth’s surface. When magma reaches the surface it is called lava.

Mantle: Layer within the Earth’s interior between the outer core and crust.

Obsidian: A black glass formed from lava when cooled rapidly.

Plinian: Plinian eruptions are the largest type of explosive eruptions. They typically expel huge amounts of material and can send ash to the stratosphere. Plinian eruptions were named after Pliny the Elder who recorded the eruption of Mount Vesuvius when it buried Pompeii.

Pumice: A type of volcanic rock formed from gasses rapidly forced through magma. These gasses froth up the magma to form a light, porous rock as it cools.

Pyroclastic: Material and processes involving the violent expulsion of rock or magma.

Skylight: An opening in a lava tube formed when the cooling rock collapses in on itself. This leaves a hole where the lava flow can be viewed from outside.

Vent: An opening where volcanic material erupts from the Earth’s surface.

Volcano: A mountain or hill formed around a vent by the erupted material.

Vulcanology: Sub-branch of geology concerning the study of volcanos and volcanic phenomena.