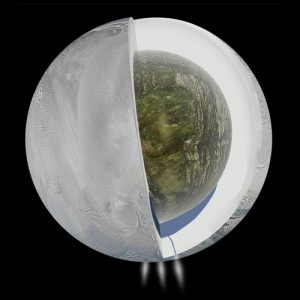 Researchers involved with the Cassini-Huygens Saturn Mission announced evidence of the existence of a liquid water ocean under the frozen surface of one of Saturn’s moons.

Water was first detected back in 2005 when the Cassini spacecraft discovered ice and water vapor venting from Enceladus’ South Pole. Further investigation of the gravity data provided by Cassini suggests a large body of water under 30 or 40 kilometers of the moon’s ice crust. Their findings were published in the April 4, 2014 edition of Science.

The discovery of liquid water has piqued interest in what could be swimming in that water. Along with water, the vapor jets contained evidence of salt and organic compounds. Could microbial life exist on a moon only 500 miles in diameter? At the very least, the discovery expands the definition of ‘habitable zone’.

For more about the Cassini-Huygens mission, NASA and ESA are there to help you out.