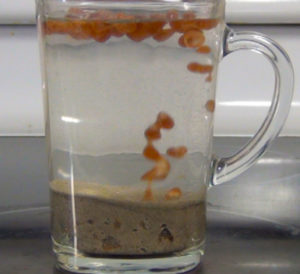 This wax model volcano illustrates many of the processes that occur in real volcanoes.

This wax and sand volcano is a realistic model volcano that is easy to make and erupts much like a real volcano. The volcano is extremely simple to make and interesting to watch. Wax “lava” forms a volcano in sand, eventually erupting into the atmosphere, which is water in this model. You can experiment with the amount of wax, quantity and type of sand and intensity of heat to form different types of volcanoes.

A real volcano forms and erupts because molten rock (magma) and hot gases push up from the Earth’s mantle into the crust. This material pushes up through the weakest spot in the crust to be released as an eruption. This wax volcano in a cup works very much the same way. Wax in the bottom of the cup is heated and becomes molten.

The materials needed for the wax volcano are inexpensive and easy to find: