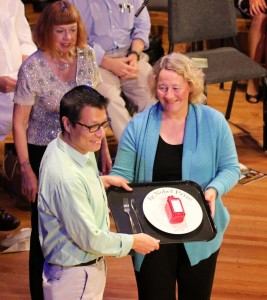 The 24th Annual Ig Nobel Prize ceremony was held on September 18, 2014. The “Igs” are awarded to achievements in science that first make you laugh, then make you think. There were 10 prize categories and each winner was awarded the actual prize. This year, the prize resembled a plate and setting with a large red pill bottle mounted on a cafeteria tray. In addition to the prize, winners are awarded a piece of paper stating they won the prize and 10 trillion dollars in cash — Zimbabwe dollars.

Physics
Kiyoshi Mabuchi, Kensei Tanaka, Daichi Uchijima and Rina Sakai
For: Measuring the amount of friction between a shoe and a banana skin, and between a banana skin and the floor, when a person steps on a banana skin that’s on the floor.
Paper: Frictional Coefficient under Banana Skin

Neuroscience
Jiangang Liu, Jun Li, Lu Feng, Ling Li, Jie Tian, and Kang Lee
For: Trying to understand what happens in the brains of people who see the face of Jesus in a piece of toast.
Paper: Seeing Jesus in toast: Neural and behavioral corralates of face pareidolia.

Psychology
Peter K. Jonasson, Amy Jones and Minna Lyons
For: Amassing evidence that people who habitually stay up late are, on average, more self-admiring, more manipulative, and more psychopathic than people who habitually arise early in the morning.
Paper: Creatures of the night: Chronotypes and the Dark Triad traits.

Public Health
Jaroslav Flegr, Jan Havlícek, Jitka Hanusova-Lindova, David Hanauer, Naren Ramakrishnan and Lisa Seyfried
For: Investigating whether it is mentally hazardous for a human being to own a cat.
Paper: Describing the Relationship between Cat Bites and Human Depression Using Data from an Electronic Health Record.

Art
Marina de Tommaso, Michele Sardano and Paolo Livrea
For: measuring the relative pain people suffer while looking at an ugly painting rather than a pretty painting, while being shot [in the hand] by a powerful laser beam.
Paper: Aesthetic value of paintings affects pain thresholds.

Economics
ISTAT – Italian government National Institute of Statistics
For: proudly taking the lead in fulfilling the European Union mandate for each country to increase the official size of its national economy by including revenues from prostitution, illegal drug sales, smuggling and all other unlawful financial transactions between willing participants.
Paper: No paper published.

Arctic Science
Eigil Reimers and Sindre Eftestøl
For: testing how reindeer react to seeing humans who are disguised as polar bears.
Paper: Response Behaviors of Svalbard Reindeer towards Humans and Humans Disguised as Polar Bears on Edgeøya.

If you’d like to watch an archive of the Livestream broadcast of the 2014 Ig Nobel Award ceremony, one is available on the improbable research Ig Nobel web page. You can catch the food themed operetta, the 24/7 lectures, moment of science demonstrations and Miss Sweetie-poo abusing winners during their acceptance speeches.

I’m still adding images, but here are some of the highlights of the 2014 Ig Nobel ceremony. I had a fantastic time!