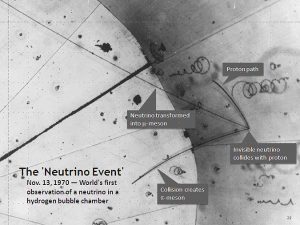 A bubble chamber was used to first detect neutrinos in 1970. (Argonne National Lab)

The Royal Swedish Academy of Sciences has awarded the 2015 Nobel Prize in Physics to:

“for the discovery of neutrino oscillations, which shows that neutrinos have mass”

Understanding the Significance of the Nobel Prize Research

A neutrino is a tiny subatomic particle has has a neutral electrical charge and half-integer spin. The word “neutrino” means “little neutral one” in Italian. Because they are so tiny, it has been difficult for scientists to learn about them. It was assumed they had a small amount of mass, but much less than that of other elementary particles.  The significance of the Nobel Prize research is that Kajita and McDonald helped unravel the mysteries of the universe through their key contributions to our understanding of neutrinos. They determined neutrinos change characteristics or “flavors” while traveling.

Takaaki Kajita’s experiments with the Super-Kamiokande detector in Japan led to the discovery that neutrinos have a “chameleon-like” presence and switch between two identities in the atmosphere.

Arthur B. McDonald and his team in Canada at the Sudbury Neutrino Observatory determined neutrinos from the Sun did not vanish on their way to Earth, but were captured with a different identity.

In case you are wondering, the exact value of the mass of a neutrino is not yet known. But, even knowing the particles have mass helps us understand the universe. It is possible neutrinos could be particles that make up hot dark matter. You can learn more about the research at the Nobelprize.org website.

What the 2015 Nobel Prize in Physics Gets You

Kajita and McDonald will split the 8 million Swedish kronor (about $960,000) prize money. Each winner will be awarded a diploma and a gold medal at the prize ceremony on Dec. 10.