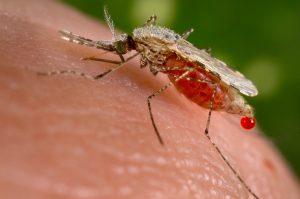 The 2015 Nobel Prize in Physiology or Medicine recognizes the incredible advances made in treating parasitic infections. (photo: CDC)

The 2015 Nobel Prize in Physiology or Medicine goes to William C. Campbell and Satoshi Ōmura for developing a therapy for roundworm infections and Youyou Tu for her therapy to treat malaria. One half of the prize is awarded Cambell and Omura and the other half to Tu.

The prize recognizes the importance of the dramatic improvements these treatments made in reducing mortality from parasitic infections. The diseases Malaria, River Blindness, and Elephantiasis affect hundreds of millions of people. The improved treatments markedly improve survivability and quality of life.

Satoshi Ōmura developed novel strains of Streptomyces bacteria that were active against pathogens. William C. Campbell used Ōmura’s Streptomyces strain in his research, ultimately purifying the bioactive agent now called Avermectin, which was modified to become the drug Ivermectin. These chemicals are extremely effective against parasites in humans, farm animals, and pets.

Youyou Tu investigated the use of traditional herbal medicine to treat malaria, focusing on the plant Artemisia annua. She extracted the active component Artemisinin, which is effective against malarial infection in both humans and animals. Artemisinin kills the parasites early in their development, helping to prevent and treat severe malaria.

Ivermectin and Artemisinin have had an immeasurable global impact! Artemisinin is estimated to have reduced malaria mortality rates in children by over 30% and over 20% overall. Ivermectin has nearly eradicated River Blindness and Lymphatic Filariasis, plus the drug is effective against a host of other parasitic organisms.